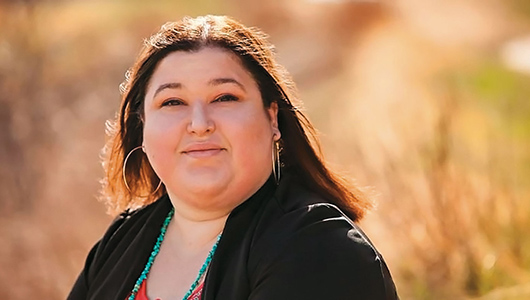 The Indian name of Annita Lucchesi (’16 MA Amer. Studies), who is a Southern Cheyenne descendant, is Hetoevėhotohke’e—which translates to the peaceful sounding Evening Star Woman. But Lucchesi calls herself mé’êśko’áe—a hellraiser girl, one who is always stirring things up.

In November 2018, Lucchesi produced a groundbreaking report on missing women that was published by the Urban Indian Health Institute, a division of the Seattle Indian Health Board. U.S. Senators Maria Cantwell and Patty Murray and Representative Derek Kilmer, from Washington state, attended a news conference unveiling the report.

It revealed that there were 506 cases, dating back to 1943, of American Indian and Alaska Native women and girls across the United States who had been murdered or are missing. Most of the cases had occurred between 2010 and 2018.

Based on that report, which was limited to certain American cities, Lucchesi estimates there are at least 25,000 such cases dating back to 1900 in the United States and Canada.

“We, as a community, already knew that this violence was occurring. But because there is such a lack of communication between law enforcement and the community on this issue, we knew it was bad, but we didn’t know how bad,” Lucchesi says. “And so, now that we have some concrete numbers, even though they’re an undercount, I think it’s really horrified and disturbed a lot of people and I’m really excited to see what happens moving forward.”

The main reason that so little attention is paid to missing and murdered Native females, according to Lucchesi, is racism in some law enforcement agencies.

Lucchesi is now a doctoral student in the Cultural, Social, and Political Thought program at the University of Lethbridge in Alberta, Canada. She says her independent research on missing and murdered Native females grew out of the master’s thesis she did at Washington State, which maps intergenerational experiences of genocide in Native communities.

“My experience is that families do report missing persons cases and they’re often turned away by law enforcement,” Lucchesi says. She says the families “are told, ‘Well, she’s probably just off partying—come back in a couple weeks.’

“That’s illegal,” Lucchesi says. “They’re not supposed to do that; they’re supposed to take a missing persons report right then and there, but they’re not doing that.”

And when police agencies don’t take missing persons reports, that means there typically is no public announcement of the case and no news coverage of it, she says.

Lucchesi points to the case of Ashley Loring Heavyrunner, who went missing from Montana Blackfeet Reservation in June 2017. The FBI announced in March 2018 that it was investigating the case. But according to Lucchesi, family members had been pressing local and tribal police agencies for months before that, with no results. “I know that they felt, and that the community has felt, that there wasn’t enough follow-up—too little too late.”

The cases in Lucchesi’s report were identified from data from information requests made to law enforcement agencies, state and national missing persons databases, searches of local and regional news media online archives, public social media posts, and direct contact with family and community members who volunteered information on missing or murdered loved ones.

It cites problems with law enforcement jurisdiction disputes and lack of record keeping, as well as lack of media attention to such cases.

“Law enforcement needs to be held accountable for existing failures and also we need to have strengthened policies and protocols, standardized policies and protocols, for handling these cases,” Lucchesi says. One step, which is included in federal legislation known as Savanna’s Act, would require police agencies that receive missing persons reports to notify tribes, so that they might help locate the missing person. “That’s free and easy to do and yet is not being done anywhere,” Lucchesi says.

It’s worth noting that a couple of months before the report was released, the Associated Press produced a lengthy article examining why Native American women go missing. The article said the issue is gaining traction among federal lawmakers.

Savanna’s Act is named for a young Native woman, Savanna LaFountaine-Greywind, who was murdered in 2017 in North Dakota when she was eight months pregnant. The bill failed to pass in 2018, but was reintroduced in January. It aims to clarify the responsibilities of federal, state, tribal, and local governments; to improve coordination and communication among them; and to increase the collection of data on missing and murdered Native females.