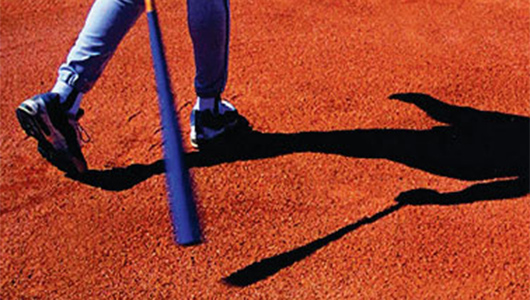 Baseball, writes Bill Gruber (’79 PhD English), evokes a literary state of mind. Now an English professor at Emory University, he explains that the suspense, narrative, soaring victories, and crushing tragedies of stories also appear in baseball, perhaps more than any other sport.

In Baseball in a Grain of Sand, Gruber explores baseball history and drama through one summer season of an American Legion team in Moscow, Idaho, the Blue Devils. Along the way, he meets and introduces fascinating people, many of whom share Gruber’s unabashed sentimentality for the sport.

The American Legion team exemplifies in numerous ways how baseball connects to Gruber and other fans. By taking a deep look this way, he writes, the game’s complexity “…comes into much sharper focus in the gritty, unglamorous, underfunded, and quickly forgotten games of an American Legion baseball season.”

Gruber moved from Atlanta, where he taught at Emory University, to Moscow in 2012, where he continued to teach online. But teaching a class on baseball and American culture did not satisfy his itch for all things baseball, so he undertook his mission to follow the Blue Devils through the summer of 2014.

The stories of each game, the people Gruber met, and the insights into baseball as an integral part of American culture and history come alive in this book, not only for baseball fans but for anyone who enjoys fine storytelling from someone who truly loves the subject.

Top image: From the cover of “Baseball in a Grain of Sand.”