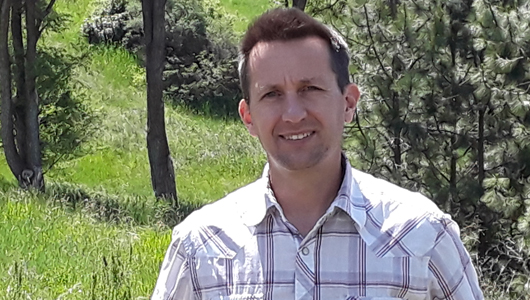 While shocking images of giant gyres of plastic trash in the world’s oceans cause widespread alarm, a more insidious threat to ecological and human health may be the nearly invisible microplastics in local waters, said environmental science professor Alex Fremier.

Supported by a Fulbright Global Scholar Award, Fremier will spend four months in Belém, Brazil, collecting water, fish and sediment samples in the Lower Amazon River Basin with the aim of learning where microplastics (pieces measuring less than five millimeters) occur in the regional web of human food.

Tiny bits of plastic that enter the food chain, or food web, can pose direct physical and chemical harm to numerous organisms, including humans and “we need to understand more about their potential health risks with released toxins,” said Fremier, a riparian ecologist who studies ecosystem transformation.­

“Our main objective is to identify fish species and fishing locations that indicate exposure to microplastics in the region,” he continued.

Fremier will work with scientists from the Universidade Federal do Pará (Federal University of Pará, or UFPA) to gather data from across the Rio Solimões and Rio Negro, two main tributaries of the Amazon River. The researchers will quantify the presence of microplastics in three feeding guilds of fish—pescivores, ominvores and herbivores—and in water and sediment to characterize the fate and load of microplastics in the Brazilian Amazon from the interior to the coast.

The researchers will begin by identifying the most commonly eaten fish and shrimp across the Amazon and analyzing examples found at markets to determine their microplastic accumulation. After quantifying the amount and type of microplastics the animals ingested, they will sample local waters to correlate land use with microplastic concentrations.

While in Brazil, Fremier also will focus on training the next generation of environmental scientists there and in the U.S. He plans to work with UFPA colleagues to develop a long-term study-abroad program, beginning with a proposed new course at WSU called “Amazon Culture and Ecology.”

“Belém and the Amazon are textbook settings for weaving together an understanding of local ecology and culture,” Fremier said. “For example, an initial study of gastronomy and the environment—such as fish and toxic pollution—will provide a nexus for learning about people, place and environmental issues, as well as setting up constructive student-to-student interactions between Brazilian and U.S. students.

“Importantly to me, the course will be a platform to introduce American students to a country little-known in the U.S. and to introduce Brazilian students to Americans they typically do not see on television. We hope to create cultural and research exchanges for many students, some of whom may go on to further discovery.”

Fremier is an associate professor in the School of the Environment (SoE) and based at WSU Pullman. His research interests include fluvial geomorphology and ecology and the mechanisms that couple ecologic processes with the shapes, gradients and other key characteristics of streams. His master’s degree in geography and doctoral degree in ecology are from the University of California, Davis.

Fulbright programs operate in more than 155 countries, sending American faculty members, scholars and professionals abroad to lecture and/or conduct research for up to one year to increase mutual understanding across the globe.

By Adrian Aumen, College of Arts and Sciences.