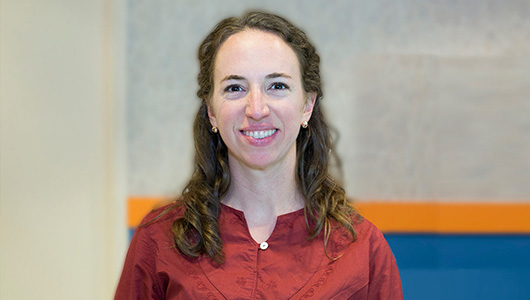 A Spencer Foundation grant for $50,000 is funding research into textbooks for Spanish-language classes and how those may help or hinder student learners.

Anne Marie Guerrettaz, assistant professor of language, literacy, and technology in the College of Education, is the principal investigator, with co-PIs Nancy Bell from the Department of English, and Nausica Marcos Miguel from Denison University’s modern languages program.

“I have discovered over the past year that 90 percent of English-speaking American kids that study a foreign language don’t actually learn it,” Guerrettaz said. “That number sort of surprised me but it also didn’t.”

Current resources being examined
The primary resources most classrooms have are the teacher and the textbook. While Guerrettaz acknowledges the huge – and primary – role that teachers play in the classroom, her research deals with only the textbook.

“We go into different Spanish classrooms around the country and look at the different textbooks that are used, and what kind of learning those textbooks illicit,” Guerrettaz said. “Kids in Spanish-language classrooms won’t learn if they’re just sitting there listening to their professor talk about grammar. So the heart of our research is that we look at what kind of learning the textbooks offer or perhaps not offer.”

Seems simple enough. You’d think it had been done before. But there’s the kicker.

“It’s really odd that researchers haven’t really studied foreign language textbooks, almost at all,” she said. “They may be studied in isolation, so the researcher may sit in their office and analyze an individual textbook, but they’re not going into the classroom and seeing how the textbook is used by the teacher and the students.”

A new methodology
The researchers are primarily collecting data in university classrooms that are studying intermediate-level Spanish, which Guerrettaz said is not too dissimilar to high school. The research is being done with 12 different professors or Spanish instructors in three different states.

“We’re looking at the resources and what sort of design features tend to do a better job of giving opportunities for students to actually speak the language,” she said. “We know, in linguistics, that if people have the opportunity to speak, to interact, that it translates into better language acquisition.”

By C. Brandon Chapman, College of Education, for the WSU Insider