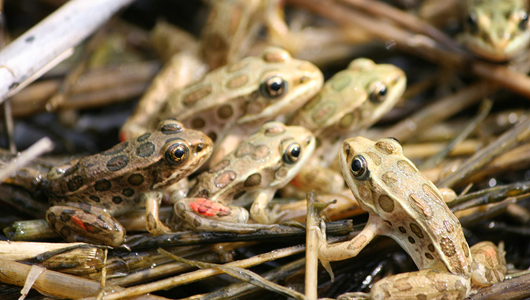 With the help of WSU scientists, hundreds of endangered northern leopard frogs have taken a leap back into the wild in recent weeks at the Columbia National Wildlife Refuge in Grant County.

The Washington Department of Fish and Wildlife (WDFW) collected northern leopard frog eggs earlier this spring, and after months of growing in conservation labs at WSU and the Oregon Zoo, the frogs were ready for release in recent weeks.

“It was really exciting to see these frogs go out into their world,” said Erica Crespi, assistant professor in the School of Biological Sciences. “It was like watching my children go off on their first day of school. It was especially great to see them start to eat their first insect meals as they hopped away. We are all hoping that they will continue to thrive in their original home.”

Crespi and her graduate student Bernardo Traversari, along with WSU collaborators Caren Goldberg, assistant professor in the School of the Environment, and Allan Pessier, clinical associate professor in the College of Veterinary Medicine, played an important role in the project by rearing frog tadpoles at the Airport Gardens research facility in Pullman. The WSU team’s efforts also included disease surveillance, genetic assessment, population modeling, and experiments to determine optimal rearing conditions to maximize the probability of a successful reintroduction.

Although abundant in the eastern part of their range, northern leopard frogs are rapidly disappearing from their native habitat in Washington, Oregon, Idaho, and western Canada. The species has been listed as endangered in the Evergreen State since 1999, and with only one known population remaining in Washington, there is still a long path to recovery for the frogs.

Likely causes of the frogs decline in the Pacific Northwest include a combination of threats from habitat loss, disease, non-native species, pollution and climate change.

By raising eggs through tadpole stage to froglets at the Oregon Zoo and WSU, the partners are working to bypass these threats and grow the population of Northern Leopard Frogs in the region.

The Columbia National Refuge manager and the WDFW, with the help of the WSU team and lots of volunteers, will be monitoring the population to assess the success of the reintroduction attempt and learn how to optimize future releases.

Check out a short video of the recently released northern leopard frogs below.

To learn more about how WSU scientists are taking amphibian research to the global level, read this recent story in the Washington State Magazine.

Top photo: Some of the 152 Northern Leopard froglets just released at the Columbia National Wildlife Refuge on Aug. 9, 2019. Each frog was tagged with a non-toxic colored implant just under the skin on their leg so wildlife managers can track the survival of the frogs over time to assess the success of the reintroduction effort. Photo by Bernardo Traversari