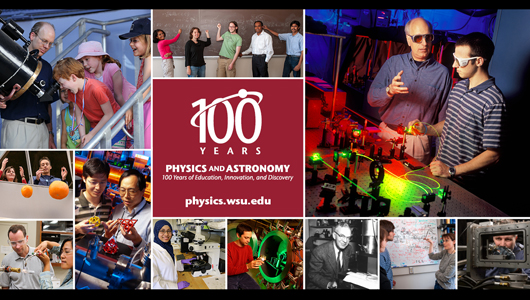 From critical early developments in television technology to recent detection of cosmic phenomena in faraway galaxies, WSU physicists have been at the forefront of scientific education, innovation, and discovery for 100 years. This fall, the Department of Physics and Astronomy (P&A) will launch a yearlong series of free, public events to celebrate its long history of achievement and strong foundation for future success.

On Thursday, Sept. 5, J. Thomas Dickinson, Regents professor emeritus of physics, will talk about his more than 50-year career in teaching and research and his award-winning work in materials and surface physics. He will also discuss the significant research of the late Paul Anderson, WSU physics professor from 1931–63, whose innovations in ultra-high vacuum technology contributed to countless inventions and discoveries—from television to the cell phone to evidence of black holes colliding billions of light years away.

Dickinson’s presentation, which is part of the department’s Distinguished Colloquium Series, will begin at 4:10 p.m. in Webster Physical Sciences Building, room 17. It will be followed by dedication of the J. Thomas Dickinson Undergraduate Study and a community reception on Webster Mall.

“The depth and breadth of contributions made over the decades by this department to foundational science and technological progress is truly amazing, particularly since we’re a relatively small department compared to our peers,” said Brian Saam, professor and chair of the department. “Our students especially benefit from the cutting-edge work of P&A faculty and researchers, past and present, and the opportunities to be directly involved in research and education beyond the classroom.” 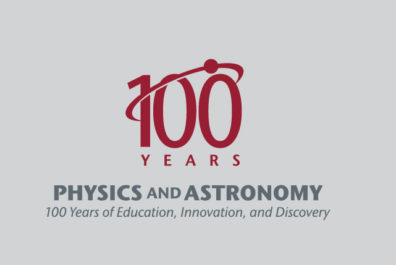 Events through spring 2020
Other anniversary events planned throughout the academic year will focus on the profound legacies of late WSU physics professors William Band, 1949–71, a vanguard in theoretical physics, and George Duvall, 1964-88, a pioneer in shock physics research whose seminal work propelled WSU to world prominence in the field.

On Oct. 17, Yogendra Gupta, Regents professor of physics, Creighton distinguished professor, and director of the Institute for Shock Physics (ISP) at WSU, will talk about Duvall’s work in shock wave and high pressure research and his own innovations and discoveries in the field of dynamic compression science.

ISP is a multi-disciplinary research organization focused largely on understanding materials at extreme conditions. Under Gupta’s leadership, it was named a U.S. Department of Energy/National Nuclear Security Administration “Center of Excellence.”

“The lineup of distinguished guest speakers, such as professors Wineland and Filippenko, makes this an outward-looking celebration as well, providing an even broader context to consider the great work that has been done here at WSU,” Saam said. “We anticipate several very dynamic and informative presentations suited to diverse audiences in addition to valuable one-on-one interactions between invited speakers, guests and our faculty and students.”

“We are pleased and proud to be celebrating 100 years of education, innovation and discovery in physics at WSU,” said Matthew Jockers, dean of the College of Arts and Sciences. “Our students, faculty and staff in physics and astronomy are continuing a long legacy of achievement. As they build upon this strong foundation, they surely will advance physics research and understanding of the universe for the next 100 years.”