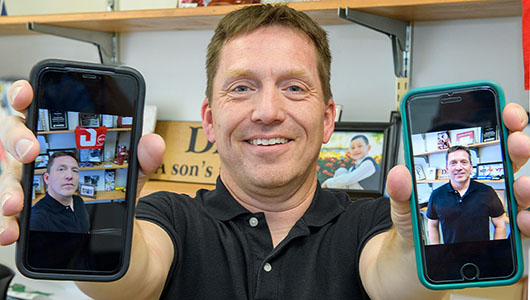 If you lose sleep over how people perceive you on Instagram, you might want to think twice before posting that selfie. That’s the main takeaway from a new study in the Journal of Research in Personality by WSU psychologists.

The scientists conducted a novel experiment with hundreds of actual Instagram users to determine if there are certain types of self‑image posts that cause others to make snap judgements about the user’s personality.

Their work shows that individuals who post a lot of selfies are almost uniformly viewed as less likeable, less successful, more insecure and less open to new experiences than individuals who share a greater number of posed photos taken by someone else. Basically, selfie versus posie.

“Even when two feeds had similar content, such as depictions of achievement or travel, feelings about the person who posted selfies were negative and feelings about the person who posted posies were positive,” said Chris Barry, WSU professor of psychology and lead author of the study. “It shows there are certain visual cues, independent of context, that elicit either a positive or negative response on social media.”

Barry began researching possible links between Instagram activity and personality traits around five years ago. At the time, the idea that people who take lots of selfies are probably narcissists was front and center in the pop culture world.

Barry decided to put the popular theory to the test. He conducted two studies investigating potential links between posting lots of selfies on Instagram and a narcissistic personality.

Somewhat surprisingly, the research was inconclusive.

“We just weren’t finding anything,” Barry said. “That got us thinking that while posts on social media might not be indicative of the poster’s personality, other people might think they are. So, we decided to design another study to investigate.”

A novel experiment
Barry, along with WSU psychology students and collaborators from the University of Southern Mississippi analyzed data from two groups of students for the study. The first group consisted of 30 undergraduates from a public university in the southern United States.

The participants were asked to complete a personality questionnaire and agreed to let the researchers use their 30 most recent Instagram posts for the experiment.

The posts were coded based on whether they were selfies or posies as well as what was depicted in each image, such as physical appearance, affiliation with others, events, activities or accomplishments.

The second group of students consisted of 119 undergraduates from a university in the northwestern United States. This group was asked to rate the Instagram profiles of the first group on 13 attributes such as self‑absorption, low self‑esteem, extraversion and success using only the images from those profiles.

Barry’s team then analyzed the data to determine if there were visual cues in the first group of students’ photos that elicited consistent personality ratings from the second group.

They found that the students who posted more posies were viewed as being relatively higher in self‑esteem, more adventurous, less lonely, more outgoing, more dependable, more successful and having the potential for being a good friend while the reverse was true for students with a greater number of selfies on their feed.

Personality ratings for selfies with a physical appearance theme, such as flexing in the mirror, were particularly negative, the researchers found.

Other interesting findings from the study included that students in the first group who were rated by the second group as highly self‑absorbed tended to have more Instagram followers and followed more users.

The researchers also found the older the study participants in the second group were, the more they tended to rate profiles negatively in terms of success, consideration of others, openness to trying new things and likeability.

“One of the noteworthy things about this study is that none of these students knew each other or were aware of the Instagram patterns or number of followers of the people they were viewing,” Barry said.

The researchers have several theories to explain their results.

The generally positive reactions to posies may be due to the fact that the photos appear more natural, similar to how the observer would see the poster in real life.

Another explanation is that selfies were far less frequently posted than posies and seeing one could signal something strange or unusual about the poster.

“While there may be a variety of motives behind why people post self‑images to Instagram, how those photos are perceived appears to follow a more consistent pattern,” Barry said. “While the findings of this study are just a small piece of the puzzle, they may be important to keep in mind before you make that next post.”