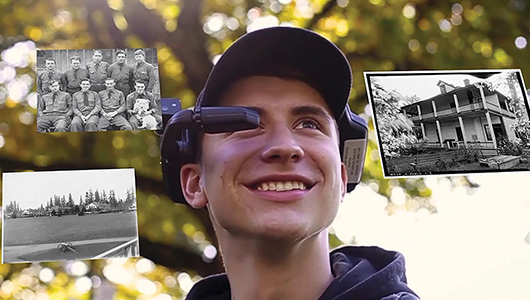 When RealWear, a San Jose–based knowledge transfer company, moved into the Artillery Barracks of Vancouver, they essentially became a part of The Historic Trust. With both organizations interested in bringing the local community together, a simple conversation birthed the grand idea of melding together the technology of RealWear, the history of Vancouver, Wash., and the talented students of WSU Vancouver’s Creative Media and Digital Culture program.

Since fall 2017, Richard Burrows, director of community outreach and engagement at The Historic Trust, has worked with CMDC Director and Professor Dene Grigar’s students to develop three technology-based projects to provide engaging, interactive opportunities to experience the history of Vancouver in new ways. Each has been the focus of a senior seminar class, the last class taken before a CMDC senior graduates. The first project was the Providence Academy Journey, an augmented reality experience, and the second, Unfolding Vancouver, an interactive game for tablets and smartphones. The graduating class of December 2018 developed Now iTour, an interactive tour given through a headset considered the world’s first head-mounted tablet, or the RealWear HMT-1. The company provided 10 headsets to The Historic Trust for the students to develop the application and for the Trust to give the tours.

“I have to say, Dene said this was probably the most complex of all the things,” Burrows said. “It just so happened the assembled students for that particular senior project year were the right people at the right time for the task.”

Now iTour begins at O.O. Howard House, home of The Historic Trust, where visitors rent their RealWear headset, which they wear clipped onto a baseball cap. Once you have your map and card of voice commands to navigate the application in the headset, you can begin the approximately hour-long tour in learning Vancouver’s rich history.

“This is an opportunity for smaller groups or individuals to have an experience that a large group tour could have, all by themselves, but with their own timing and at the leisure of being able to walk and stop,” Burrows said.

Guests are guided down Officers Row to the Marshall House, where they loop back around and down to the Storehouse, then back up to O.O. Howard House. As you’re guided to eight of the most important stops in the historic site, you can use voice commands to access different parts of the tour, such as historic images students gathered in the research process. The entire script was narrated by Troy Scott, who also developed the voices of different characters who tell their own stories.

“There’s a lot of really valuable information about the Vancouver Barracks and that part of Vancouver in the context of the history of the Pacific Northwest and this country in general,” said Taylor Riordan, content development specialist for Now iTour. “I’m hoping the tour we’ve put together is informative and opens people’s eyes to the value we have in this area.”

RealWear’s HMT-1 was originally built for industrial environments. As explained by Chris Parkinson, chief technology officer and co-founder of RealWear, an average industrial worker might need to interact with a computer, tablet or smartphone while on the job.

“Using your hands to hold a tablet is not very practical when you’ve got gloves on, you’ve got tools in your hands and you’re trying to do work,” Parkinson said. “The aim of our device was to take all the information from a tablet or phone, and re-package it into a wearable device you can operate without using your hands.”

RealWear primarily focuses on industrial and enterprise clients versus entertainment and consumer markets. This collaborative partnership between RealWear, The Historic Trust and WSU Vancouver changes that. Now iTour may be the HMT-1’s first jaunt into educational entertainment, but if the launch of the tour is popular with the public, it won’t be the last. “Initially, it’s a fun thing to do,” Parkinson said.

Aside from the custom application, one of the deliverables to RealWear was a white paper providing recommendations regarding the effectiveness of using GPS and Bluetooth beacons with the HMT-1.

“I’m very impressed with the students themselves. They’ve achieved a lot in little time with something that’s still quite new,” Parkinson said. “The unique feedback they’ve provided will make the product even better.”

“That class was probably one of the best classes I’ve ever taught,” Grigar said. “They needed so little direction—they knew what they were doing and just did it. It was a really hard project—nobody had ever created a wearable project in their classes ever—but they just gobbled it up, loved it, took it and ran with it.”

Grigar tailors the senior seminar class to the “superpowers” or special skillsets of her students. She matches at least one real-world, hands-on project with a local business or organization to each class. Previous award-winning projects include the virtual reality environment for the Columbia River Economic Development Council, and augmented reality mobile applications for the Mount St. Helens Institute and the Oregon Museum of Science and Industry. Students are broken into teams and work with the client as if they were paid professionals, but with a restricted 16-week semester deadline. By the time they give their final presentation to their client, these soon-to-be graduates are so well prepared with in-demand skills for the job market, the program job placement rate sits at 90 percent.

Many of the students from this project landed jobs after graduating, two with RealWear and one with The Historic Trust. Both Parkinson and Burrows said this isn’t the last time they’ll be working with Grigar and CMDC students. They’re looking forward to the next opportunity for another project.

Top photo: Scene from the student-produced promotional video showing historical photos viewers will interact with on a tour of historic Vancouver.

By Adeena Wade for the Spring 2019 issue of Northwest Crimson & Gray and WSU Insider.