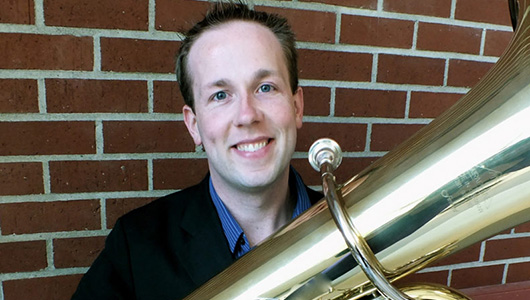 WSU tuba professor Chris Dickey traveled to Tianjin, China in August to perform and teach at the 2019 JinBao International Low Brass Festival, an event that attracted approximately 450 performers from throughout China.

Dickey, clinical associate professor of music, participated on an international faculty featuring artists from the United States, Denmark, China, Switzerland, and Austria. He worked with Chinese students ranging from advanced high school players to university-level and conservatory-trained students. Throughout the week, Dickey coached students who qualified for the final round of the festival’s prestigious solo competition. The pool of 150 tuba players was whittled down to just six finalists vying for top cash prizes.

“I heard students with incredible skills while in China,” Dickey said. “The students were eager to learn. Our time together was so rewarding because of their commitment to their craft and willingness to embrace new ideas.”

Evenings during the festival focused on solo and chamber music recitals from the guest faculty. For Dickey’s solo recital, he decided to feature music from his third solo album.

“The festival organizers asked me to play music the audience would enjoy but not have heard before. This was a perfect request for me because it was related to the intent of my new solo CD. I wanted to highlight some American music that deserves to be programmed more frequently. My recital selections included works by Elizabeth Raum, James Stabile, and Thomas Benjamin. The evening concerts were also a terrific source of inspiration for students and faculty alike. The performances were of such high quality that you could not help being inspired.”

Dickey hopes to have many more collaborations with Chinese tuba players in the future. “Now that I am home, I am still struck by the positive experience I had in China. I would love to see continued interactions among tuba players from all parts of the world.”