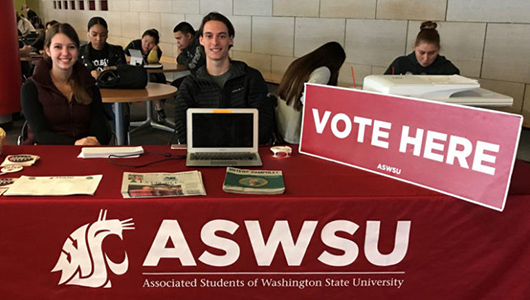 In recognition of WSU’s high level of student engagement, the university has been selected as a 2019 LEAD Initiative Institution by NASPA, a national organization for student affairs professionals.

Civic engagement takes many different forms across the WSU system. Some students serve on important university boards and participate in community organizations. Others work tirelessly educating their peers about election issues and registering them to vote. Yet others lend their voices to supporting proposed legislation they deeply care about.

Driving much of this work system-wide is the Center for Civic Engagement (CCE) located on the Pullman campus.

In partnership with numerous student organizations, faculty, and staff across the WSU system, CCE’s message of civic and democratic engagement had been a consistent one leading up to last year’s mid-term election, and that focus continues today as our nation approaches the primaries and next year’s presidential election. The center’s staff will be reaching out to students in the Compton Union Building between Constitution Day on Sept. 17 and National Voter Registration Day on Sept. 24 to talk about the importance of being informed citizens, exercising their right to vote, and getting involved in the community.

Ben Calabretta, interim co-director of WSU’s Center for Civic Engagement, said civic engagement supports WSU’s land-grant mission, which applies knowledge through engagement to improve the quality of life and economy of society. He noted that WSU has a history of student activism dating back to the 1960’s and 70’s when large protests took place on the Pullman campus denouncing the Vietnam War and advocating for civil rights.

“Civic engagement has always been a part of the WSU culture,” Calabretta said. “Being an active member of the community inspires people to take action because they see first-hand what the issues are and how they impact people.”

Developing civic-minded students
WSU Vancouver Chancellor Mel Netzhammer said preparing the next generation of students to be active citizens has historically been a big part of the mission of colleges and universities. That began to change when higher education funding models shifted over the decades and students became much more focused on getting jobs.

“How do we reclaim that space? How do we see civic engagement and education as part of our responsibility again?” Netzhammer asked.

Those questions prompted him to get involved with the American Democracy Project (ADP) prior to coming to WSU when he served as provost at Keene State College. ADP is an initiative created by the American Association of State Colleges and Universities (AASCU) to produce college graduates who are equipped with the knowledge, skills, and experiences to be informed, engaged members of their communities. He currently sits on the project’s board of directors.

When Netzhammer arrived at WSU in 2012, he was excited to bring his knowledge and passion for civic and democratic engagement to the Vancouver campus, which he calls a perfect place for such efforts. “With about 90 percent of WSU Vancouver students coming from the immediate area and 92 percent of them staying in the region after graduation, our students are extremely devoted to helping make their community the best it can be,” he said.

Nationally, WSU Vancouver is leading a new AASCU project called the Digital Polarization Initiative. Mike Caulfield, director of Blended and Networked Learning, is serving as the project’s inaugural civic fellow and is developing a curriculum that will help students become attentive consumers of information they see on social media, helping them to distinguish between real and fake news.

Finding their voice, testing their power
Much of the news on social media and elsewhere is focused on politics these days and student volunteers across the WSU system are engaging their peers in discussions about election issues and voter registration.

As president of the Political Science Club on the Pullman campus, senior Jordan Smith devoted most of the club’s meetings last year to studying the various candidates and election issues, both locally and nationally.

Since most students haven’t been out in the workforce and seen the impact policies can have, she said many are just learning about the political process and how they can have a voice through the act of voting. Many students are unaware that they can vote while away at college and the Political Science Club has been teaching them how to register.

“Every single policy the legislature passes, either locally, at the state or national levels, impacts your life in some way, or at least impacts someone you know,” Smith said. “We spend a lot of time in our meetings looking at all sides of each issue, and because we are informed, we can see how the issues relate to us and why they are important.”

The Political Science Club is one of 57 student organizations across all six WSU locations that partnered with CCE last academic year. In all, student groups organized 183 events, engaged 11,567 individuals, and registered 1,181 new voters. They hosted debate watches, conducted two student debates, and organized several creative voter registration events. The widespread effort led NASPA to name WSU a Voter Friendly Campus, joining just 83 others across the nation with that designation.

With the average age of WSU Spokane students being a little older and voter savvy, a team of graduate and professional students there successfully lobbied the state legislature last spring to pass a house bill that changed health care practice and training laws. The bill allows any licensed nurse, pharmacist, or physician to supervise or precept any students enrolled in those disciplines if they and the students meet certain criteria.

Because faculty are stretched thin between their research, teaching, clinical practice, and service, pharmacy student Brandy Seignemartin said it was often difficult to find enough preceptors from each of the disciplines to keep up with the students’ desire for community service.

“I began working with stakeholders at the state level including state associations of nursing, medicine, pharmacy, and many more, students on campus, as well as deans and faculty of the health science colleges to build an active advocacy base and craft a bill proposal that all parties could support,” Seignemartin said.

Largely due to the overwhelming student interest and support of this project, Seignemartin said she is working with some of the most civically active student organizations, the Health Science Student Advocacy Association, and Health Equity Circle, to create a WSU Health Sciences Civic Engagement Council.

Student leaders Savanna Navarro Kresse and Akanna Poor from the Associated Students of Washington State University Tri-Cities (ASWSUTC) have led many efforts to engage students with the Cougs Vote project, helping the WSU system claim victory in the Student Voter Registration Challenge last year, a friendly competition created by the Washington Secretary of State’s Office. They also successfully lobbied for the installation of the campus’ first ballot box.

Fostering engagement in the classroom
Instructor Katie Banks said student interest in civic and democratic engagement is growing on the WSU Tri-Cities campus. Much of the culture around engagement there emanates from several key courses that integrate community engagement into the curriculum. In her political science 101 course, Banks asks students to apply core course concepts outside the classroom by attending relevant campus and community events. She also asks students to research a topic important to them and write a letter to a politician explaining why it deserves their attention. In partnership with Human Development (HD) 205 faculty on the Pullman campus, Banks challenges students in her freshman seminar to create positive change in the community though an act of kindness. They have done everything from volunteering at the animal shelter, playing games with senior citizens, and knitting hats for Seattle Children’s Hospital.

“What this does is change students’ perceptions of what it takes to create change,” Banks said. “They tend to think that it takes a lot of time, energy, or money to impart meaningful change, when all it really takes is a simple act of kindness.”

To help WSU students find meaningful community engagement opportunities, CCE has developed over 1,000 community partners across our region, the state and globally. According to CCE Interim Co-Director Tiffanie Braun, the goal no matter what community organization they become involved with, is for students to learn what issues are important to that organization and how those organizations are working to make change in their community.

“Helping students understand how they fit into that change process is critical for when they go out into the real world after graduation and become difference-makers in their new communities.”

By Steve Nakata, Division of Student Affairs, for WSU Insider