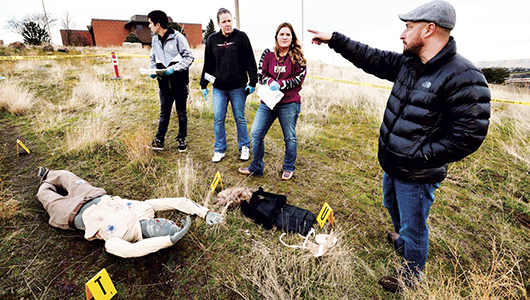 Why do people commit crimes? There are a lot of theories, says Matt DeGarmo (’14 PhD criminal justice). Reasons range from needing to steal for simple survival to performing a cost-benefit analysis and deciding that crime does indeed pay.

When DeGarmo came to WSU to work on his doctorate, he says, “I was doing a lot of theory building,” trying to organize all the various theories of why people commit crimes. He says he was also interested in possibly working with Bryan Vila, now an emeritus professor of criminal justice who founded a hazardous tasks lab at WSU Spokane and wrote an influential book about cultural policing based on his experience training officers in Micronesia.

“But when I got here, I got into field research,” DeGarmo says. “I went to Chiapas,” in Mexico near the border with Guatemala, “and stayed in a prison for a week.” The prison DeGarmo visited was home not only to kidnappers, murderers, and child molesters, but their wives and children as well.

“It’s like being in a small village, where you can see everything happen in front of you,” DeGarmo says. “There’s not a lot of structures, so people basically lived in hammocks with tarps over them to protect them from the elements.”

DeGarmo also studied drug markets in the Ozarks and St. Louis. He used a network of contacts to gain access to dealers and, once he earned their trust, interviewed them to better understand their motivations for working in the black market.

Says DeGarmo, “We’re probably the only college in the U.S. with a student-only security team.”