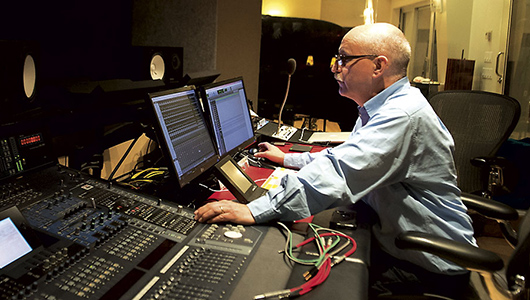 The first thing you might notice about the Washington State University recording studio is the silence. It starts when Dave Bjur, studio manager and chief engineer, closes the hallway door, sealing off the random din of the Kimbrough Music Building’s top floor. Then he closes a second door and a weird sensation settles into the ears that, when you think about it, is rare in the modern world.

It’s an anti-sound, the audio version of true black, a pressing absence that makes the eardrums feel like hands grasping at empty space.

This is the sonically blank slate on which WSU music students and faculty immortalize their art. It also epitomizes some of the wholesale changes in the music recording industry, from a caste system of companies and recording contracts to a more egalitarian model of do-it-yourself recording and digital distribution.

The studio was part of a two-story addition to Kimbrough in the 1990s. The faculty wanted a way to record and share their scholarly output, and the Paul G. Allen Family Foundation helped with a $625,000 gift.

“It’s a way to share our scholarship widely,” says Greg Yasinitsky, Regents Professor of music, saxophonist, and composer. A concert can only reach so many people, however far away, “but if we make a recording, people all over the world can hear it.”

Indeed, when Yasinitsky visited his daughter in Europe and asked if she had received some compact discs he had sent, she confessed she didn’t have a CD player. But moments later, she said, “Oh, here you are,” and there he was on her phone, on Apple Music.

Through the studio and the School of Music’s in-house label, Washington State University Recordings, WSU faculty have produced more than a dozen classical and jazz recordings. Each one goes through a peer-review process with musical experts from around the United States before being distributed through iTunes, CD Baby, Amazon, Apple Music, Spotify, YouTube, and other services.

WSU Recordings is only a fraction of the music made in the studio, says Yasinitsky, with other recordings released on different labels, as publisher’s demos, and more. Also, at the Allen Foundation’s request, the studio is open to everyone at WSU and in Pullman for the nominal charge of $40 an hour.

For students, the studio is a way to develop “blended careers” in which performing is only one of several skills. The school just started offering a music technology minor aimed at building a foundation for recording, production, and performance.

“It’s part of the education for the future, in a way,” Yasinitsky says. “It’s probably what folks should have been teaching music students at the tail end of the twentieth century.”

“Are we ready?” Bjur says over the intercom.

It’s a long, dynamic piece with lots of moving parts. One challenge, Bjur says, is the band invariably plays louder during a recording than the sound check.

“Kid’s got a nice clarinet tone,” he remarks during a solo. Capturing it is a Neumann U67, the go-to microphone of Al Schmitt, a Grammy-draped producer behind more than 150 gold and platinum records and a Bjur guru.

It’s just one of many fastidious details in the process. Another: multiple computers running algorithms just for reverb. With the right adjustments, the studio can sound like a church, concert hall, or nightclub.

At one point a muffled thud comes through the control room speakers. Someone bumped a mic, says Bjur, but he can isolate it and replace it with sound from an earlier take.

“What doesn’t work is if someone plays the wrong note,” he says.

That doesn’t happen. The students finish the tune at 12:59 p.m. The students applaud, give Ward a parting gift, and quickly scatter.

Top image: Bjur at the control board in the WSU recording studio (Photo Dean Hare/WSU)