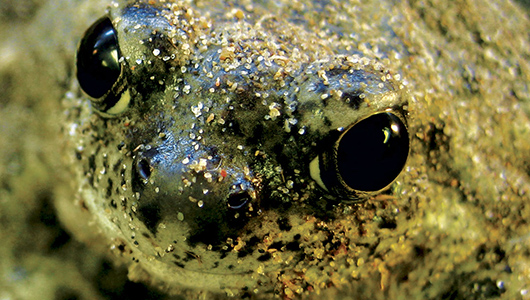 The doctoral student in environmental and natural resource sciences admits to a soft spot for the shy creatures. Working with associate professor Rodney Sayler in the WSU Endangered Species Lab, Gómez is conducting the first comprehensive survey of frogs and salamanders on the Palouse Prairie since the 1930s.

Though it’s estimated that only two or three percent of native Palouse Prairie remains intact, he was pleasantly surprised to find a healthy biodiversity of amphibians living here.

“We set out to see if we still have some historical legacy left,” Gómez says. “Even with such a highly-modified ecosystem here, we found everything we expected plus the Great Basin spadefoot toad. So, we still maintain the ecological memory but the species are not as widespread or abundant as in the past.”

Gómez says one of the biggest factors affecting where amphibians can successfully breed is the presence or absence of non-native fish, like goldfish, which devour thousands of eggs and tadpoles.

Goldfish are introduced by humans and were found in nearly half of the permanent wetlands he surveyed. Gómez believes eliminating the goldfish could allow dwindling amphibian populations to recover.

“Three winters ago, there was a big fish kill in the WSU Arboretum woodland pond,” he says. “That next summer was one of the highest in productivity of Columbia spotted frogs seen in any Palouse wetland. There were thousands of them plus long-toed salamanders and tree frogs, the three most common amphibians in the area.

“Since then, the goldfish population has rebounded and amphibian numbers have dropped dramatically.”

Long-toed salamanders, for example, can live in a variety of habitats—such as seasonal wetlands, grasslands, or woodlands—as long as there are no fish. It’s similar for Pacific chorus frogs.

Columbia spotted frogs, a species of concern in Washington state, need a more permanent wetland. Gómez says they are typically found in wetland complexes on the eastern edge of the prairie.

Western toads, on the other hand, prefer the Snake River, as do bullfrogs, an introduced species and voracious predator. Large enough to coexist with fish, bullfrogs can also be seen in parks and in some wetlands.

The rare spadefoot toad is unusual in that the adults are nocturnal and stay underground during the day, says Gómez. He accidentally discovered their tadpoles in a drainage ditch where the farmland hadn’t been plowed in several years.

Despite such biodiversity, Gómez says there is still room for improvement. His number one counsel is never put goldfish or bullfrogs into wetland ponds.

“Number two is don’t plow or plant agricultural fields right up to the edges of wetlands,” he says. “Create a buffer zone. Even the ponds that dry up for a bit can still be very important for amphibians as they metamorphose into adults. The wetland doesn’t have to hold water year round—they just need moist soil to survive.”

Read about other WSU amphibian research in “Where have all the frogs gone?