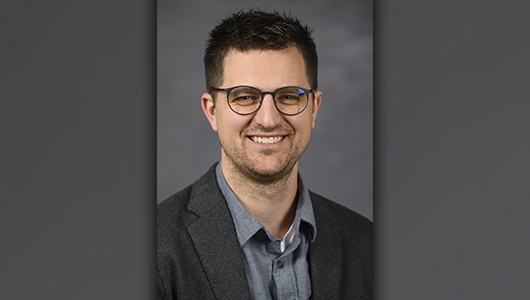 An expert in environmental conflict and the sociology of energy systems, Dylan Bugden has been named Boeing Distinguished Professor in Environmental Sociology.

Bugden is an enthusiastic educator and researcher who examines environmental electoral politics, social movements, and land-use conflicts with a focus on energy infrastructure and resources, said Monica Kirkpatrick Johnson, chair of the Department of Sociology. He also studies the unequal distribution of environmental risks and benefits, particularly as they intersect with public conflicts.

“The Boeing Professorship is a genuinely transformative resource for my work and for the research being done in the new Environment and Society Laboratory,” Bugden said. “The sociology department at WSU is known nationally as the historical home of environmental sociology, and our lab will build on this legacy while expanding it in new, exciting directions.”

Working with students and other faculty in the lab, Bugden seeks to identify the social roots of environmental and energy challenges and to inform equitable structural solutions. The lab was established with support from his Boeing professorship and provides opportunities for students to develop and apply critical knowledge and skills in research, education, and outreach.

Bugden, who this spring joined the department as an assistant professor, is still in the early stages of his career but “fast becoming a thought leader in environmental sociology,” Johnson said.

His ongoing work addresses areas of burgeoning interest and consequence to his students: the relationship between climate protest and partisan polarization, rural energy transitions, smart meter deployment, and the community impacts of high-energy digital technologies, such as cryptocurrency.

In previous work, he has dealt with smart energy infrastructure, hydraulic fracturing (“fracking”), and conflicts over sense of place.

He has authored or co-authored three book chapters and several refereed-journal articles, including Energy Policy’s most-downloaded article of 2014. His work also has been cited in Nature and other major publications, and he has served as a reviewer for a number of scholarly journals, including American Sociological Review, Environmental Politics, Rural Sociology, Risk Analysis, and Society and Natural Resources.

Bugden co-organized the Energy Impacts Research Summit in May 2018 at Cornell University, where he earned his doctoral degree in natural resource studies. He holds a master’s degree in environmental and energy policy from Oregon State University.

Since 2014, he has been awarded more than $250,000 in direct support for his research, including $124,000 from the USDA National Institute for Food and Agriculture to study barriers and opportunities for transitioning to renewable energy.