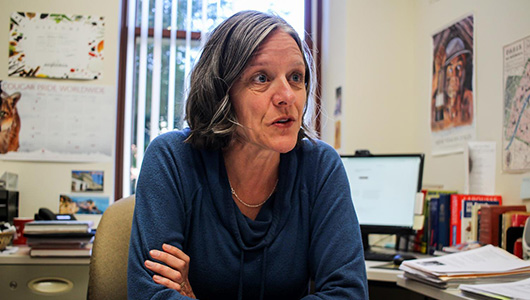 For the tenth year in a row, the Palouse French Film Festival offered students and local community members the opportunity to experience a slice of European culture.

“Some of our films get more toward the history of France, some are more modern and [delve into] culture or today’s French society,” said Sabine Davis, clinical professor of French and co-organizer of the festival.

The four films, screened at Kenworthy Performing Arts Centre in Moscow, Idaho, are more than an entertaining showcase, said Davis. All of them reflect on the French lifestyle, and French movies have been influential to international cinema.

“For me and my colleagues, organizing this kind of an event is an extension to our class. Taking our students to see those films really gives them a more vivid picture of what it is like to be French, to be part of that culture and that heritage,” said Davis.

Teresa Spencer, freshman psychology major, said this event showed WSU’s respect to a diverse community because it shows people can come from many different backgrounds and interests but still come together as a community to share and celebrate those differences.

“WSU students come from all over the world, and we enjoy so many different things. I think this event will allow WSU students to experience another culture in a unique way,” Spencer said.

The 2019 Palouse French Film Festival was made possible with support from WSU’s College of Arts and Sciences, School of Languages, Cultures, and Race, Department of History, and Honors College; University of Idaho’s College of Letters, Arts and Social Sciences, Department of Modern Languages and Cultures, International Programs Office, University Studies Abroad Consortium, Martin Institute, and Program in International Studies; The Wine Company of Moscow; and private donors.

Adapted from story by Eurus Thach for The Daily Evergreen