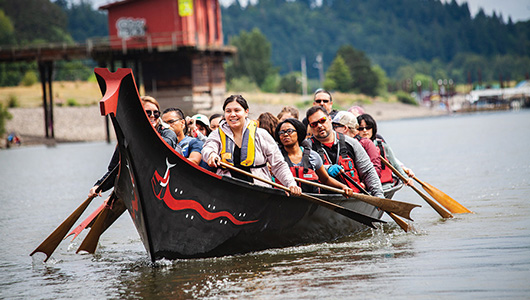 They began with instructions in the Cathlapotle Plankhouse near Ridgefield, Wash., followed by canoeing and hearing stories from Johnson. The building is a full-scale Chinookan plankhouse built by volunteers based on findings from the archaeological village site of Cathlapotle.

The class also featured the novel “Solar Storms” by Linda Hogan. The story is set in the boundary waters between Minnesota and Ontario, and focuses on the impact of the fur trade and massive hydropower projects, and the healing power of an all-woman canoe journey. Speakers from the Nez Perce and Cowlitz Indian tribes were also scheduled to visit the class.

Hellegers, a WSU associate professor of English, received a 2019 fellowship endowed by Lewis E. and Stella G. Buchanan, which provided seed money for the course. She developed the course in consultation with Lakota/Cheyenne activist/researcher Roben White, who is a member of WSU Vancouver’s Native American Community Advisory Board.