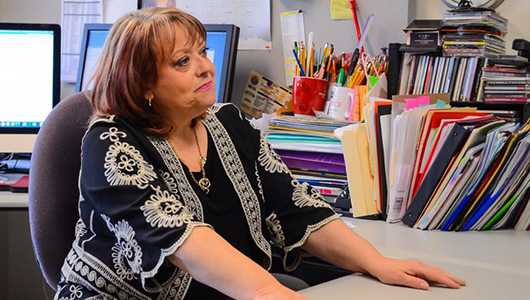 Lori Wiest may be a professor of music and director of choral activities, but her interests and involvements extend far beyond the WSU School of Music.

Wiest did not start her undergraduate career as a music major, but added it on to her chemistry track at the end of her sophomore year, she said. She later taught music and chemistry while she decided what she wanted to do.

“I was thinking about that, even as an undergrad, how important it was for people to make music, be a part of music, even when that wasn’t their particular degree,” Wiest said. “Just because you decide to make a degree in another direction, doesn’t mean you don’t have the talent to be a musician.”

Wiest said her parents were involved on several different directory boards in her small hometown, including the school board to the hospital board, and instilled the importance of this and this involvement was something they taught their children about.

“It was important that they pass that on to their children and that we be involved in our community,” Wiest said. “My community is WSU. I want to be investing in the students, in my music, in committees that I serve on because to me it’s really important that we are invested and don’t just take that for granted.”

During her 29 years at WSU, Wiest said she has held a lot of leadership roles including being an associate dean for the Graduate School and the College of Arts and Sciences, as well as interim chair for the former Department of Foreign Languages and Cultures. Both her analytical mindset and her music background helped her be successful in such positions, she said.

“I love that because I’m very organized and thoughtful about things, but I also love that the music part of me, the creative part, has made it less linear and more I see things as a big picture,” she continued.

Wiest is officially a vocalist and pianist, but her true passion is choral conducting.

“I love what can be the result of taking a composer’s work and bringing it to life, recreating what it is that they’ve envisioned and heard in their minds,” she said.

Wiest said her students find her funny because she has synesthesia, so when she hears certain instruments or sounds, she sees different colors. “I’ll say, ‘Can you sing that more blue?’ and [the students] go, ‘What color blue? What’s the hue of blue?’” Wiest said. “I’ll say, ‘I would just like it to be less yellow.’”

Julie Wieck, associate professor of music at WSU and one of Wiest’s longtime colleagues and friends, said Wiest is one of the best choral conductors she has ever worked with.

“She breaks form so that her gestures assist [singers’] vocal technique,” Wieck said. “[I think] they are honored to be able to sing under her.”

Wieck said one of her favorite memories with Wiest was a 2016 trip to South Korea because she arranged for students to learn yoga and martial arts from Buddhist monks.

In addition to South Korea, Wiest has taken singers to Austria and Russia, among other countries. She said she loves opportunities for her students to not only make music but be immersed in other cultures while doing so.

“Our tours, yes, we are there because of the music,” Wiest said. “But it’s so much more than that.”

Top image: Wiest in her office in Kimbrough Hall on the WSU Pullman campus (Photo by Taylor Olson/Daily Evergreen)

By Emma Ledbetter, The Daily Evergreen