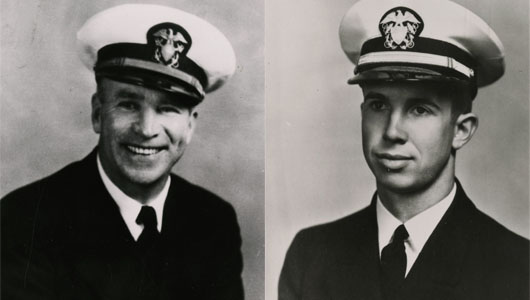 The touching tales of these four young men’s lives, their connections to Washington State University and the ultimate sacrifice each made in World War II are all part of a unique historical collection being created by students and faculty in the Department of History at WSU.

When complete, the Fallen Cougars Project will honor some 200 former students, faculty and staff of Washington State College—now WSU—who fought and died in U.S. military service after the Dec. 7, 1941, Japanese attack on Pearl Harbor drew America into war.

Beginning next summer, the servicemen’s biographies will be placed online for public access through the Mukurtu cultural archiving platform managed by the Center for Digital Scholarship and Curation (CDSC) at WSU.

‘A bridge to the past’

Begun in 2017 by associate professor of history Raymond Sun, the project “serves to finish what former WSC President E.O. Holland began 70 years ago: a lasting monument to the Cougars who gave their lives in the Second World War,” said history doctoral candidate Samantha Edgerton, who wrote 20 of the biographies this summer.

“Beyond being a monument, their stories serve as a permanent reminder of not only the changes that occurred in the past seven decades but also the similarities that connect WSU students across time and space,” Edgerton said. “They offer a bridge to the past.”

Like today’s students, the Fallen Cougars came from a variety of backgrounds and faced many of the same challenges, such as paying for their educations or being first in their families to pursue college degrees. The bombing of Pearl Harbor moved many of them to enlist, and in the actual face of war, they performed “above and beyond themselves,” Edgerton said.

For months, she pored over letters to and from the soldiers and their loved ones, seeking insights to their personal lives. She scoured newspaper clippings, school yearbooks, and other documents, including both military- and ancestry-focused websites, to find anecdotes and details about their time in college and in military service.

“I wanted to create meaningful biographies—so they’re not just statistics on a wall,” she said.

Heart-rending letters written by grief-filled mothers, fathers, widows, and friends provide insights to the fallen servicemen’s personalities as well as the dynamic impacts of their absences on families and entire communities that can still be felt today, she said.

Her extensive research, which focused on Cougars who died in the Pacific Theater of Operations, was supported by the Lawrence Stark Graduate Endowment to WSU Libraries’ Manuscripts, Archives, and Special Collections (MASC.)

Edgerton’s work is part of the larger project Sun designed as both a community service and a teaching tool. Undergraduates recently in his World War II class researched the lives of 12 Fallen Cougars and entered their moving stories to the MASC digital archive. They also recorded a video with library staff about their experience.

Illuminating individuals
Like Edgerton, the students wanted to honor the men’s humanity by illuminating their lives both before and during college as well as during wartime.

The Fallen Cougars biographies “will allow more people to relate to and find themselves in them and bring a more human understanding of the war—more than just the military understanding that we normally approach it with,” said 2019 history graduate Nancy Nightingale.

“It would be easy to make it about military battles, statistics of what happened and the methods … (until) all these individual people become a mash of one unit,” Nightingale said. “But they’re individuals with individual stories, with individual histories, individual likes and needs and wants and dislikes,” she said.

“The stories of these individual men, who aren’t the generals, who aren’t the presidents or leaders of nations, are just as important and just as captivating,” said M.J. Vega, now a graduate student in history. “There’s something to learning about their stories and preserving them … making sure that these men are not lost to time.”

Education and commemoration
Sun conceived the idea for the Fallen Cougars Project after attending the national teachers conference of the Friends of the World War II Memorial, an organization dedicated to commemoration and education about the war. A summer fellowship from the CDSC last year enabled him to create a framework for the permanent digital exhibit he envisions as an enduring way for the WSU community and broader public to connect with the Fallen Cougars.

As an educational tool, the project aims to enlighten current and future generations about the everyday men and women whose courage, character, creativity, and determination led to victory in the war and helped reshape America. It sheds new light on a long-overlooked piece of Cougar history, Sun said, “while paying due respect to those who sacrificed everything.”

Public input welcome
Sun and the Fallen Cougars Project welcome contributions of further historical information about WSU/WSC students, faculty, staff and alumni who died in military service during WWII by email to sunray@wsu.edu.