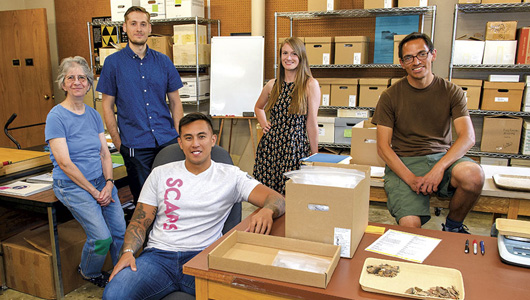 The cool, high-ceiling basement room in College Hall is furnished in Spartan fashion. On this summer day it’s library quiet, but not by tradition or rule. It’s the natural product of deep concentration, as the lab’s three curation technicians, all student veterans, work their way through a collection of ancient artifacts.

At a cluster of mismatched tables in the center of the room, senior Chris Sison carefully examines a tray of artifacts, occasionally consulting a set of printed cards or making a note in pencil. The contrast between this and his recent Army tour of duty in Afghanistan—“chasing militants and kicking down doors,” as he puts it—couldn’t be more stark.

Lives don’t hang in the balance anymore, but when you leave the military, your own future suddenly does. Yet neither stress nor worry impinges upon the lab’s occupants as work proceeds under the friendly, watchful eye of Cassady Fairlane (’14 Anth.), the technicians’ trainer and guide in the Veterans Curation Program (VCP).

While Sison sorts through a paper bag filled with chipped stone shards and partially completed stone points, Fairlane explains how the techs identify each item and note its essential characteristics. Artifacts of particular significance also get photographed to facilitate future study.

In a separate room, lit only by a lightbox and a high-resolution monitor, Trent Raymer (’19 Zool.) photographs a handful of arrowheads and spear points that Sison had flagged earlier. Like everything else in the VCP lab, it’s a painstakingly precise process. Future researchers will need to draw solid conclusions from the lab’s work, so every detail has to be just right.

Meanwhile, Bergquist works at a computer station. Unsurprisingly for a former diesel mechanic, it’s his least favorite station in the lab. Still, he clearly articulates its importance: Without the maps, legal documents, notes, and narratives tying their provenance together, most of these artifacts would be merely random (if interesting) ancient debris.

“I care a lot about this stuff,” says Fairlane. She gestures toward the boxes that line the walls, but it’s clear she’s also speaking in a larger sense. “I want to make sure it’s preserved.”

The program, which is funded and overseen by the U.S. Army Corps of Engineers, has a twofold mission. The first is Fairlane’s specialty: preserving history.

The VCP labs process at-risk collections that have been languishing in boxes and storage rooms for years. Decades, even. Most of the WSU lab’s collections were excavated in the 1980s.

In addition, the program gives its veteran employees a boost in the sometimes difficult transition from military to civilian life. The WSU lab, which just completed its first year in the program, is one of several satellite locations scattered across the United States. It works on collections from the Army Corps of Engineers Portland District, which covers most of Washington and Oregon.

While the VCP lab sites all aim to help prepare their employees for college applications and civilian careers, the WSU lab technicians happen to already be in college. In fact, Raymer earned a bachelor’s degree prior to joining the Air Force; he’s getting a second one to kick-start a new career.

As the summer winds down, the lab’s first cohort is moving on: Raymer is hitting the job market, Sison will begin his final year in the WSU ROTC, and Bergquist is finishing a degree in Japanese.

And what happens to all those artifacts they’ve painstakingly cataloged, photographed, sealed, and re-boxed? They sit and wait. Until a more permanent home is found, the WSU Museum of Anthropology will store them with the rest of its collections. For the first time since they were excavated, these newly curated artifacts—remnants of ancient lives—are available for study and research.