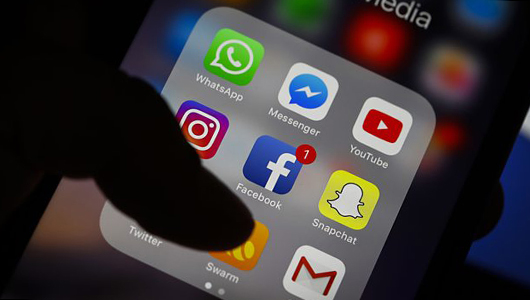 Several hotly contested government seats and the likely fate of Brexit were all up for grabs in the Dec. 12 general election in the UK. To find out how social media and other digital campaign tactics are being used to influence—or manipulate—British voters, BBC World Service invited Travis Ridout, WSU political science professor and political media expert, to the UK to investigate.

In his 30-minute BBC radio documentary, “The Digital Election: How social media is reshaping UK democracy,” Ridout shares highlights and insights of his interviews with a variety of sources, including British voters and online advertising professionals. He talks with a candidate in a tight race for parliament and a food deliveryman who runs a politically focused Facebook group with more than 30,000 members.

He also interviews a professor in London who examines how the Internet is used to harass politicians, and reports from a key marginal constituency to learn how digital campaigning is being used to target undecided voters.

Politics have grown particularly volatile and unpredictable in the UK in recent months, given the deadlock over Brexit, Britain’s plan to withdraw from the European Union. As the high-stakes election enters its final stages, British voters are taking in unprecedented amounts of political messaging via social media and other digital sources, Ridout said.

“Platforms like Facebook, Twitter, YouTube and Instagram are playing a more prominent role than in any previous campaign,” he said. “The British love their social media, and some trust it more than traditional media, while others take it with a grain of salt.”

Because political advertising on television is prohibited in the UK, the parties are focusing their paid efforts online, where they can employ a number of innovative strategies, including some that reflect U.S. influences.

An array of strategies and powerful ‘tricks’

“British political parties have really adopted that American style of attack advertising and attack messages in a way that wasn’t previously so easy to do,” said London-based Sam Jeffers. He lives in Cork, Ireland, and runs a crowdsource app called Who Targets Me, which lets people know who is behind the ads in their social media feeds.

“Away from the paid political attack, social media has also brought out some disturbingly aggressive behavior,” Ridout said.

“A great deal of the environment that’s become more negative is actually about individuals’ behavior. It’s about individual people on social media harassing and intimidating individual politicians,” said Rosie Campbell, professor and director of the Global Institute for Women’s Leadership at King’s College, London. “It’s about individuals having anonymity and a freedom to behave in a way they simply couldn’t before.

“We know, for example, that women politicians, particularly ethnic minority women politicians, are the recipients of disproportionate abuse online, harassment that sometimes tips into actual abuse in the real world offline. And that is something that really wasn’t, to the same extent, a feature of politics 10 years ago.”

Memes, scare stories, and strange rumors that are now endemic to online political discourse in the U.S. are becoming common in UK campaigns as well. Against this background, British politicians are “adopting new tactics,” Ridout said.

According to digital strategist Rob Blackie, who works for Best for Britain, a lobbying group opposed to Brexit, political parties in the UK are spending more on creating content that goes beyond traditional advertising and designing it for online distribution as well.

They are also leveraging the impact and immediacy of social media to control the news spotlight, he said.

“Politicians now are gaming the media to get things discussed so that other things don’t get discussed. That sort of sleight of hand—it’s a real magician’s trick to distract people—is a really powerful thing that politicians can do,” Blackie said.

A complexity of trust

Among Ridout’s stops for interviews was Canterbury, famous for its cathedral and Chaucer’s tales, and more recently for an astonishing turnover in the last elections that has been attributed to digital campaigning, he said.

Canterbury voters increasingly get their news from social media instead of traditional newspapers, according to the chair of a local reelection campaign. Indeed, at least one resident said he trusts what his friends post on social media much more than what he finds in mainstream news media.

Ridout uncovered opposing views from students at Greenwich University in London about which media to trust, despite the broad popularity of social media with younger voters.

“Is social media reshaping democracy in the UK?” Ridout asked. “It’s complicated for sure.”

He’s looking forward to getting back into the classroom this spring, he said, “and sharing what I learned from this project with students in my Media and Politics class. The experience brought home the fact that digital and social media are not just influencing American campaigns but campaigns globally.”

The program can be heard on the BBC World Service and on BBC Sounds.

The Thomas S. Foley Distinguished Professor of Government and Public Policy at WSU, Ridout is also co-director of the Wesleyan Media Project, which tracks political advertising. His research on political campaigns and political advertising has appeared in numerous scholarly journals in the United States and abroad and in several book chapters. His most recent book is Political Advertising in the United States (2016).