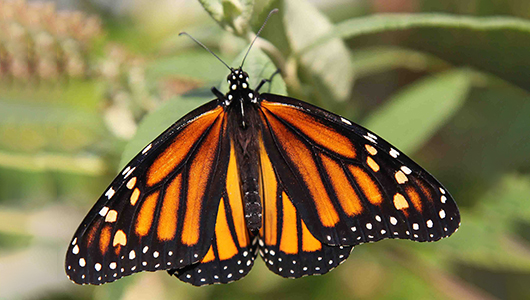 From bees to butterflies, ants to wasps, insect populations of all kinds are at risk, according to a growing scientific consensus. Their decline also threatens the many ecosystem services that depend on them, including food production.

“It’s clear that we’re experiencing massive insect declines both in species and in abundance,” said WSU Vancouver conservation biologist Cheryl Schultz. “We are becoming increasingly aware that species that were once common across the landscape are now rare.”

To avert this potential disaster, Schultz recently joined more than 70 scientists from 21 countries in issuing a “Road Map for Insect Conservation and Recovery” in Nature Ecology & Evolution.

In their road map, the scientists outlined steps to slow and help reverse the decline in insect populations. They propose immediate “no regret” solutions, steps that can only help insects recover while they work to build more scientific knowledge of the problem. These immediate steps include increasing landscape heterogeneity in agriculture; phasing out synthetic pesticides and fertilizers; and enhancing “citizen science” as a way of obtaining more data on insect diversity and abundance.

“As scientists, we want to gather all available knowledge and put it to action together with land managers, policy makers and everyone else involved,” said Jeff Harvey, lead author on the paper and professor with the Netherlands Institute of Ecology and Vrije Universiteit Amsterdam.

One of the butterflies at risk is the western monarch, which winters in California and until recently, had a breeding range that included parts of Washington and southern British Columbia. The western monarch’s population has been in decline for several decades, and in 2018, the population crashed to fewer than 30,000 monarchs, less than 1% of the estimated population in the 1980s. Schultz is currently conducting work to increase understanding of the western monarch’s biology so that conservation efforts can be directed at the times and places most likely to contribute to population recovery.

Conservation efforts can have a major impact, Schultz said, pointing to success of the Fender’s blue butterfly which was first listed as endangered in 2000.

“Through collaborative work and partnerships between scientists, managers and the public, we have turned things around, and Fender’s blue is recovering,” she said. “The decline in insect populations is a big problem. This is a road map to take action.”

Top photo: One of the butterflies at risk is the western monarch, which winters in California and until recently, had a breeding range that included parts of Washington and southern British Columbia.