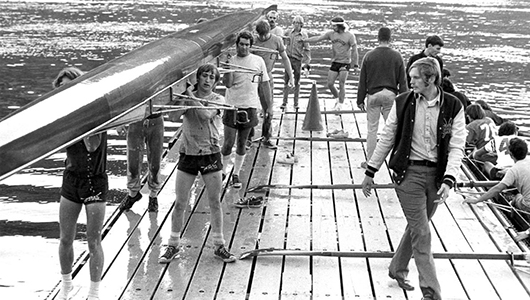 Out here, among the rolling hills of the Palouse, generations of rowers have pulled hard. They’ve learned life lessons on the Snake River, where conditions can change instantaneously and team work is essential. They’ve forged lifelong friendships. They’ve made memories.

Alan Klier (‘75 Physics)
Missing the Boat
Until mid 1973, Cougar Crew shells were rentals or gifts from other universities, particularly the UW. “They were past their prime, but they put us on the water,” says Alan “Mike” Klier (‘75 Physics). He joined Cougar Crew as a freshman in 1971. Back then, the boats were red cedar. “They were great ladies,” Klier says, noting at least two “were lost to the cruel vagaries of the Snake—and one to inexperience.” 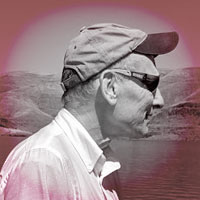 The team’s first new eight, Cougar One, came from Pocock Racing Shells in Seattle. “In a stroke, that name celebrated the achievement of a struggling crew and spoke of the promise of our future,” Klier says. “‘One’ is the first, but also a beginning.”

Cougar One was either sold off or given away—“records and memories are both inconclusive,” Klier says—when the program moved to composite hulls in the 1990s. “Some of us have searched for her over the past decade to no avail,” Klier says. “No one can tell us where she went.”

Klier would like to see one of Cougar Crew’s early shells displayed at WSU, much like the Clipper which hangs in the UW’s Conibear Shellhouse. That hull carried “The Boys in the Boat” to Olympic gold in 1936 and regained fame with a 2013 book by the same name. The UW had gifted the Clipper to the Lutes, but, Klier says, “They thought better of it in time, reclaimed her, and put her on display.” The Huskies traded back for their old boat, giving Pacific Lutheran University a shell called the Loyal Shoudy in exchange. The Shoudy ended up at WSU, where—on Black Thursday—“the seam opened up just to my right,” Klier says. “We were completely submerged. A construction crew down at the dam rescued us.” After that incident, the Shoudy, then an eight, was fashioned into a four.

Klier became interested in rowing after watching the 1968 Olympics on TV. Freshman year, Rich Stager was a resident assistant in his hall. He told him he was starting a rowing club. “I said, ‘I weigh 112 pounds.’ He said, ‘You should come,’” Klier recalls. “I had been frail all my life so I had never competed in sports. I had a competitive spirit but no physical ability. As a coxswain, those disadvantages became assets.”

They went on the water for the first time in late fall 1971. When they graduated, they nailed their names to the back wall of the boathouse. “That was tradition,” Klier says. “When you graduated you marked yourself absent permanently.”

Recently retired after 39 years in the aerospace industry in San Diego, Klier returned to the river in August with a pal from the team to celebrate—and reminisce. They visited the old boathouse and looked for their names. They couldn’t find them.

But the holes from the nails that once held them in place were still visible. So was the old oar rack in the rafters, just inside the front door. “Seeing that oar rack up there was worth the whole trip,” Klier says. “We were a motley-looking bunch. We didn’t go fast. We didn’t win much. But it was a great experience. I don’t know that we thought about (leaving a legacy) at that time. We just wanted to row.”

Mike Kimbrell (‘76 Chem.)
Kitchen Grease and Wool Shorts
One of Mike Kimbrell’s earliest memories of Cougar Crew involves a swim test of sorts. Kimbrell (‘76 Chem.) remembers the coach telling the team something like, “‘We sank last week so everybody tread water for five minutes.’ He wanted,” Kimbrell says, “to make sure everyone could swim.” 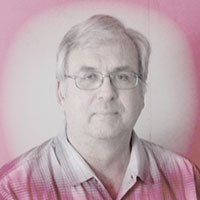 Kimbrell grew up in Pullman. (His dad, the late Jack T. Kimbrell, was a professor of mechanical engineering at WSU Pullman for 32 years before retiring in 1986.) The first time he saw rowing was watching the 1972 Olympics on TV. That same year, as a freshman, he joined Cougar Crew. “I thought it was just an absolutely gorgeous sport,” says Kimbrell, a retired chemical engineer in Huntington Beach, California. “The boats were a work of art.”

The boathouse was a different story. It had no electricity, no running water, and no restrooms. Sometimes, student-athletes—often covered in kitchen grease—would use the headlights from their vehicles to help them see inside. To lubricate the oarlocks and slides, Kimbrell says, they used Crisco “‘cause it was cheap. We’d get that grease on the back of our legs.”

On colder days, they’d wear cotton long-johns on the river. Their uniform, however, included wool shorts which shrank when they got wet. “On race days, the coach would hand them out to us, and at the end of the race we would turn them back in. There were no two ways about it; they were awful,” Kimbrell says.

Also on race days, “you would bet your shirt.” The losing team would give their shirts to the winning team. “My freshman year we lost every single race we rowed, heavyweight and lightweight. That’s a lot of shirts. My sophomore year, we started winning. I collected all those shirts and kept them all through the years.”

That wasn’t the only winning tradition. “If you won, you got to throw your coxswain in the water,” Kimbrell says. Alan “Mike” Klier was that coxswain. The two friends were in the same boat as Paul Enquist, and in 1984 they both went to the Olympics to watch their old Cougar Crew teammate row for the gold. “That,” Kimbrell says, “was just terrific.”

Doug Engle (‘80 Bio., ‘82 MS Env. Sci.)
Meat Wagon Memories
“In the early days of Cougar Crew, there weren’t a lot of rules,” says Doug “Doc” Engle (‘80 Bio., ‘82 MS Env. Sci.). “You had an interest, and you went out and rowed. We were under-funded and, in a lot of ways, discounted. To me, Cougar Crew really represents the heart of being a Coug. You go out there, and you put your time in, and you put your work in, and you can succeed.” 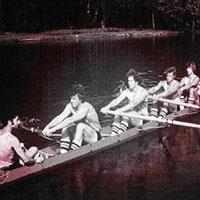 Engle, who retired last summer after 35 years with the U.S. Department of Agriculture—he was a food technologist at the Western Wheat Quality Laboratory at WSU—joined Cougar Crew as a freshman in fall 1975. He served as vice commodore during the 1978-1979 season, and volunteered as junior varsity coach for the 1979-1980 season. Among the best memories of his rowing career is being part of the “Meat Wagon,” a varsity four with coxswain boat that won the Intercollegiate Rowing Association 1979 national championships at Lake Onandaga in Syracuse, New York.

Engle was an oarsman, along with Chris “Squish” Gulick (‘80 Life Sciences), Rich “Flip” Ray (‘80 English, ’86 MA American Studies), and John “Yumbo” Holtman (‘82 Social Science). Al “Shack” Fisher (‘79 Liberal Arts) was the coxswain. The oarsmen’s average weight was 204 pounds, and their average height was six feet, four inches. At six feet, seven inches and 220 pounds, Engle was the biggest. “We were the biggest people in the program, gathered in one boat,” he says. “We were extremely heavy heavy-weights.”

They had practiced together on Sundays on the side, racing officially for the first time in Bellingham in spring 1979. When they beat a crew from the University of Washington, Engle says, “we knew we had a pretty decent boat. In rowing, times are really dependent on course conditions: headwind, tailwind, sidewind, the choppiness of the water, the current. We knew we had some speed, but we didn’t know how fast we were. The start of the race was really choppy so—because we sat low in the water—it really gave us some trouble. We came into a more protected portion of the course and our cox, ‘Shack,’ called for three consecutive ‘Power 10’ strokes. We went from being a length behind to a length up and won the race by a good amount of open water. That one race really solidified us and gave us confidence that we weren’t wasting our time going to Nationals. I don’t think we raced again”—until Nationals.