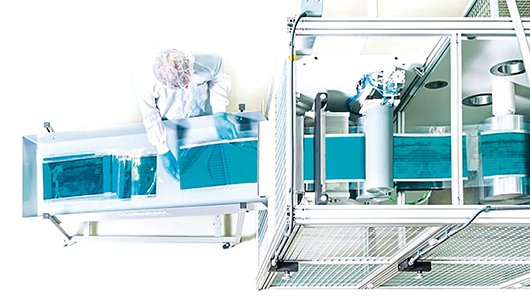 WSU physicist Brian Collins explores the nano structures of polymers—large molecules with many repeating units. Most of us know polymers from everyday life as plastics. Because they’re flexible, polymers can be used to make all sorts of electronic devices, such as phones—or solar panels.

Primarily made of carbon, one of the first big success stories for polymers in electronics was the organic LED display. Beautiful images displayed on large, lightweight screens are a result of the exploration of the fundamental properties of polymers.

Instead of projecting light, as OLEDs do, Collins says, “you want to run them backwards,” so the polymer takes light from the sun and creates power, “which is a solar panel.”

Now solar panels, like OLED TVs, can be printed on a roll. Instead of bulky panels that have to be mounted on rooftops or large solar farms, solar panel rolls can be easily installed in all sorts of environments and configurations, such as coverings for windows.

Physics at Washington State turned 100 this year. Watch videos and read about a century of physics research and innovation at WSU.