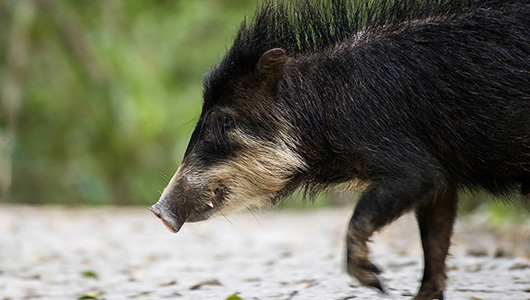 White-lipped peccaries of Central America have declined by as much as 90% from their historical range, signaling a population collapse of a key species in the region, according to a study by WSU researchers and colleagues published recently in the journal Biological Conservation.

“White-lipped peccary populations are in more of a critical condition than previously thought,” said lead author Dan Thornton. “While these results are sobering, they also offer a roadmap on how to conserve this iconic, ecologically important species.”

A pig-like animal that is an important food source for large animal predators and humans alike, the peccary (Tayassu pecari) also plays a critical role by dispersing seeds and creating water holes that benefit other animals.

The study found that current IUCN estimates underestimated the population decline. The study results are a 63% drop from the current IUCN range estimates for the region.

The researchers say that human influence and loss of forest cover are the primary causes of the decline, and that peccaries now remain in increasingly threatened pockets of forest mostly found along transboundary areas. Outside of transboundary landscapes, remaining populations were generally scattered and isolated.

Due to their social behavior and anti-predatory defense of grouping together when threatened, white-lipped peccaries are highly sensitive to hunting. Their large area needs and reliance on widely dispersed fruit and water sources also makes this species highly vulnerable to forest loss and fragmentation.

The study found that the largest contiguous blocks of habitat for white-lipped peccaries occur in several major transboundary reserves. This includes the Maya Forest of Guatemala, Mexico and Belize, the Moskitia Forest complex of Honduras and Nicaragua, the Indio Maiz and Tortuguero National Park complex of Nicaragua and Costa Rica, and the Darien/Los Katios National Park complex between Panama and Colombia.

Of particular concern to the plight of white-lipped peccaries in Mesoamerica is the status of the Maya Forest of Guatemala, Mexico, and Belize, the Moskitia Forest of Honduras and Nicaragua, and the Darien Forest in Panama and Colombia, all of which are under particularly grave threat from human activities. For example, in the past 15 years, wildlands (those areas with limited human influence) have been reduced by 30 percent in the Rio Platano/Bosawas complex and by 25 percent in the Maya Forest. Ninety percent of recent deforestation is due to cattle ranching, and these two forests are at imminent risk of losing their contiguity due to expansion of both sugar cane and cattle ranching.

“Based on this study, we believe that the white-lipped peccary should be uplisted to a higher category of threat in Mesoamerica from “Vulnerable” to “Endangered” in the IUCN Red List. We cannot afford to lose such an interesting species that has a unique social behavior of moving in large cohesive groups in a way that we still do not totally understand” said co-author Dr. Rafael Reyna of ECOSUR in Mexico and WCS Associate Researcher.

Mesoamerica’s 5 Great Forests, spanning from Mexico to Colombia, and covering an area three times the size of Switzerland, are the most critical bastions for peccaries and other wildlife, and also provide services such as carbon sequestration, clean water, and food security to five million people. WCS is part of an alliance of countries, NGOs, Indigenous Peoples, and local communities committed to protect these remaining areas.

“Without Mesoamerica’s five great forests, the white-lipped peccary will almost certainly go extinct in the region, with cascading impacts on forests, other wildlife, and people” said study co-author Jeremy Radachowsky, Director of WCS’s Mesoamerica and Caribbean Program. “We must all work together to protect these incredibly important forests.”

The research was conducted by a team of 50 scientists from 30 organizations including the Wildlife Conservation Society (WCS), El Colegio de Frontera Sur, and Washington State University.