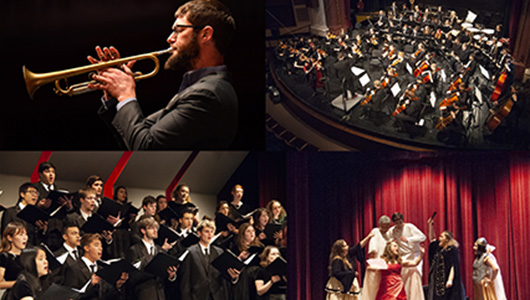 Jazz, opera, orchestra and choir—like a four-course feast for the ears, the musical showcase by WSU students and faculty on March 3 at the Fox Theatre in Spokane will serve up an array of aural treats.

Four ensembles from WSU’s School of Music in Pullman will travel to the Lilac City to perform selections from several well-known composers and some original music by a national award-winning professor. KHQ-TV weathercaster and WSU alumnus Blake Jensen will emcee the concert beginning at 7:30 p.m.

“Founded in 1901, the School of Music at WSU has a long tradition of excellence, and we’re excited to present these four outstanding musical groups to Spokane audiences,” said school director Dean Luethi.

Highlights of the program include performance of William Averitt’s “Whisper of the Dance” by the Concert Choir, joined by piano faculty member Yoon-Wha Roh and graduate student Joel Lininger, and directed by music professor Lori Wiest.

The 68-member Symphony Orchestra, conducted by associate professor of music Danh Pham, will perform Gershwin’s “An American in Paris,” as well as selections from Lucy Simon’s musical “The Secret Garden” in collaboration with the Opera Workshop, directed by music professor Julie Wieck.

The critically acclaimed Jazz Big Band I will perform well-loved tunes and new music, including “After Charlie,” a composition by Regents Professor Gregory Yasinitsky, in celebration of famed saxophonist Charlie Parker’s 100th birthday. The band also will play a work called “Best of Friends” composed by Yasinitsky, who received the American Prize in Orchestral Composition in 2018.

Tickets can be purchased online at https://foxtheaterspokane.org/.

The concert also will be livestreamed on the WSU School of Music YouTube channel.