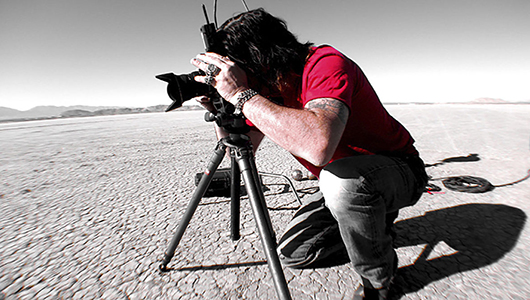 During his thirty-year career, Dean Karr (’88 fine arts) has worked with some of the biggest names in the music business and collected all kinds of keepsakes—from VIP passes and platinum records to props and guitars signed by the likes of Judas Priest and Slayer’s Kerry King. Exploring Karr’s 1926  Spanish-style home in the Hollywood Hills is like walking through a museum of rock-and-roll’s recent history. From his first-floor studio to his upstairs office, souvenirs tell the story of his work, which he sums up simply:  “I just like making cool stuff.”

Karr is known for his bold style and fantastical storytelling. In his 2005 video for Seether’s “Truth,” for example, a cast of characters—from Santa Claus to the Easter Bunny—duke it out in a boxing ring with a surreal vintage vibe. For his 2000 video for “Kryptonite” by Three Doors Down, he “imagined  a place  where old superheroes go to retire.”

Karr drew on life experience for “No One Knows” by Queens of the Stone Age—hitting a deer on the drive home from Pullman during college—but added a twist. “When I pulled over, I couldn’t find it,” says Karr, who belonged to  Tau Kappa Epsilon.  “I was morbidly fascinated that he was going to come out of the woods and get revenge”—and that’s exactly what happens in the 2002 video.

Karr’s always been fascinated by the dark and bizarre. Summers during college and for months after graduation, he worked as a groundskeeper at a Seattle cemetery. That experience helped shape his aesthetic. Some of his signature imagery includes dead leaves, snakes, bats, top hats, and vintage masks and microphones. His 1970 “sublime” green Dodge Challenger has even appeared in a few shoots.  “I like working with contrasts,” Karr says. “I like working with things that don’t belong. I like contradictions, things that don’t make sense, absurdities, oddities, freaks.”

He started going to rock shows—and photographing them for fun—in high school. At WSU, he took graphic design and photography classes from Francis Ho, who taught in the Department of Fine Arts for 37 years before retiring in 2004—and whom Karr considers a mentor. “He was always encouraging,  honest,  and helpful. He taught me to understand composition and was really important in forming my  aesthetic.”

Still, “I didn’t really get my act together until I got down here (to California).”

Karr moved to L.A. in 1989 to attend the Art Center College of Design in Pasadena. But, “I was out every night seeing bands.” He met musicians who introduced him to record label reps who connected him with people in their art departments—and became so busy doing commercial photography that he stopped going to class and eventually got to work with some of the artists he idolized as a teen.

In 1992, he landed what he calls one of his big breakthroughs: photographing the album art for Tool’s “Undertow.” He keeps a copy in his rec room, bookended by a latex likeness of Dave Matthews’s head—a prop from 1998’s video for “Don’t Drink the Water.” Overhead shelves hold Karr’s old cameras, including the Nikon he used from 1994 to 2000 to photograph Matthews, Duran Duran, and more.

Karr’s album images paved his way to video; Karr shot his first  in 1994. A year later, he directed  Marilyn  Manson’s version of “Sweet Dreams (Are Made of This).” The distorted, eerie images caught the attention of other artists and execs, and kicked Karr’s career into high gear. After that, he worked with Cheap Trick, Cypress Hill,  Dr. Dre, Damian Marley, Velvet Revolver, Shooter Jennings, Godsmack, Evanescence, Lisa Marie Presley, Stevie Nicks, and others.

He’s directed shoots from Brazil and Mexico to Toronto and Prague—even inside his own home. His videos have been nominated for awards from MTV,  Much Music,  Billboard, and the Music Video Production Association. And his photographs have been exhibited at the Los Angeles County Museum of Art and on billboards on Sunset Boulevard.

In behind-the-scenes footage for Rolling Stone,  Korn’s  lead singer, Jonathan Davis, calls Karr “a great and very capable director.” In an email, Tommy Lee says he’s “one of the most creative and attentive guys on the planet!” Karr worked on two solo-album videos for  Mötley Crüe’s drummer: 2002’s “Hold Me Down” and 2005’s “Good Times.” Lee writes: “He gets it!!! The music, the feel, and the vision! It’s like he wrote the song and sees images that are on point with the artists.”

Karr considers 2001’s “Rock in Rio” concert film his “opus.” The 18-camera live shoot included two helicopters and 250,000 Iron Maiden fans, including Karr. “If you know the music like I do, you’re going to get  great  stuff. You know  exactly  when the solo’s coming up or that  next  drum  roll.”