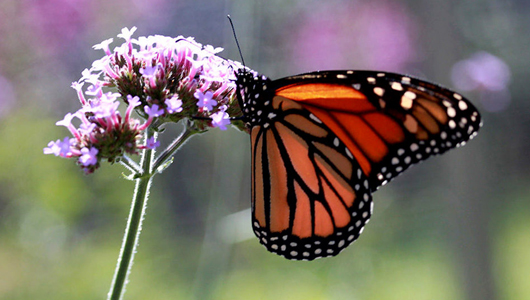 During the Western Monarch Mystery Challenge, which started on Feb. 14, Valentine’s Day, and runs through April 22, Earth Day, California residents are asked to report sightings of monarchs. The data they collect will give much-needed insight into the butterflies’ habitat needs during the spring months, so researchers can better target conservation efforts.

“We are already receiving sighting reports, which is very exciting,” said Cheryl Schultz, a WSU biology professor and a lead researcher on the project. “The reports show the enthusiastic interest by our community, and their deep connection to western monarchs.”

The data collected will help researchers better understand the western monarch butterfly, whose migratory populations have plummeted to less than 30,000 in recent years, about 1% of their levels in the 1980s.

To participate in the Western Monarch Mystery Challenge:

All data will be added to the Western Monarch Milkweed Mapper, a year-round community science project tracking milkweeds and monarchs in the West.

“Recovering the population by conserving habitat before they go extinct is critical, but it isn’t clear what regions are most important. We need a lot of eyes looking out to find out what resources western monarchs need in spring,” said Marm Kilpatrick, professor of ecology and evolutionary biology at University of California, Santa Cruz.

The Western Monarch Mystery Challenge was launched by a group of researchers from Washington State University, Tufts University, University of California at Santa Cruz and the Xerces Society for Invertebrate Conservation as part of a larger project to conserve the migratory monarch. Currently, scientists know where the butterflies spend winter months in groves along the California coast, and that wild monarchs are breeding in central California by May. However, a lot less is known about where monarchs are in February, March and April.

“We don’t know exactly where western monarchs are in spring, but we do know that this is a critical point in the life cycle,” said Elizabeth Crone, a Tufts University biology professor. “Monarch populations are smallest at this time of year and individual butterflies may be at their weakest right after their long overwintering diapause.”

Solving the mystery of where wild, migratory western monarchs are at this time of year is a way for Californians to make a contribution to conserving and restoring the monarch migration in the West.

“The Monarch Mystery Challenge is an opportunity to get even more people to participate in western monarch community science–and these animals need our help right now, more than ever,” said Emma Pelton, conservation biologist at the Xerces Society.

The project is supported by the National Science Foundation and Conservation Research Education, Outreach International (CREOi).

Top image: A monarch butterfly rests on a flower (photo by Cheryl Schultz).

By Sara Zaske for WSU Insider.