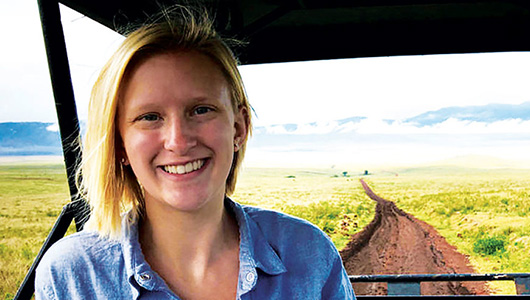 Annalise Miller saw a worrisome trend among local youths in northern Namibia, where she’s been working to promote financial literacy and entrepreneurship.

“What I noticed is many lack the basic critical thinking and leadership skills that are vital in becoming successful entrepreneurs,” she says. “They are in an economic crisis so job creation is really important.”

To help build their skills, she and her colleagues developed a five-day Exploring Entrepreneurship Kids Camp. The goal: teach 12- to 16-year-olds the basics of starting and running a business, beginning with simple principles—“like don’t spend more than you’re making.” Other focuses include personal strengths, money management, and teamwork.

“The idea was that their creativity and excitement around making things can be turned into something lucrative,” says Miller, a community economic development volunteer at a vocational training center. “It was so fun to see the campers take ownership of the program and be proud of the things that they made.”

Miller (’17 Math., Busi.) is one of more than 7,300 volunteers currently serving around the world with Peace Corps. Most are like her: single, young, female, and living and working in Africa.

Women make up 64 percent of Peace Corps volunteers in 62 countries throughout Eastern Europe, Central and East Asia, Central and South America, Africa, the Caribbean, and Pacific Islands. Their average age is 27. Ninety-nine percent are unmarried. Nearly half—46 percent—are in Africa.

In all, more than 235,000 Americans have served in 141 countries since Peace Corps’ inception. Founded 60 years ago next year—resident John F. Kennedy created the program by executive order March 1, 1961—Peace Corps has three main aims: help meet the needs of interested countries, help promote a better understanding of people in other countries, and help promote a better understanding of Americans.

Nearly 10,000 volunteers have come from the state of Washington. Of those, about a tenth—1,008 volunteers, to be exact—is made up of WSU alumni. There are 17 WSU alumni currently serving in Peace Corps.

Miller is nearing the end of her service.

“When I got to WSU, I wasn’t exactly sure what I wanted to do,” says Miller, who found her calling in international development. The summer after junior year, she traveled to northern Ghana to share best practices for clean water consumption as a field representative for Saha Global. “I really fell in love with the whole experience.”

Senior year, she traveled to Tanzania for her senior capstone project: conducting research on a smart thermometer device to aid in milk pasteurization for Kulé Tech, a company she cofounded with fellow student Victor Charoonsophonsak (’17 Mech. Eng.). They entered their project in the small-business plan competition at WSU’s Center for Entrepreneurial Studies, winning third place overall as well as merit prizes for best social impact and best presentation.

For two years now, Miller’s been working with 18- to 35-year-olds at a trade school in a town of about 6,000 people in northern Namibia, where she teaches financial literacy courses. One of her projects was hosting a business plan competition for students at three regional trade schools. She modeled it after the one she entered at WSU. When she and her colleagues hosted the kids’ entrepreneurship camp last spring, they had room for 30 campers. More than a hundred
applied.

That response underscored what she had already been feeling: “I’m in the right place. I’m doing what I should. And I’m getting more from this experience than I could possibly ever give. Everything is based on relationships here. It’s so important to develop relationships with people. That’s basically the pinnacle of the Peace Corps development approach.”