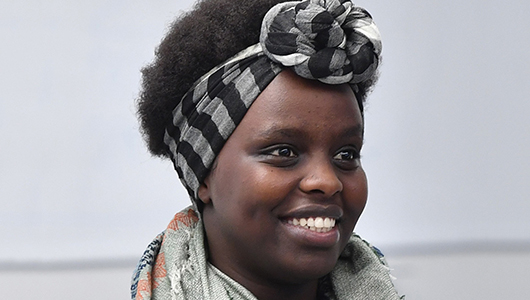 “Vanessa’s career goals evolved from her past in Africa but reflect her future as a change agent and policy leader,” said Seehafer. “Becoming our first Schwarzman is a credit to her academic preparation from WSU as well as her drive to be a changemaker when she returns to Rwanda.”

The Schwarzman, first presented to U.S. students in 2016, was created to prepare young leaders to respond to the geopolitical landscape of this century, according to its website. Scholars can focus on public policy, economics and business, or international studies. The Schwarzman is aimed at deepening the understanding of China’s role in global trends.

The Schwarzman to broaden her education
In summer 2019, Giramata was attending the Public Policy and International Affairs program at Princeton University. At a grad fair in D.C. one day, she met a Schwarzman representative and was drawn to the distinguished scholarship for post-baccalaureate studies because of its deep connections to China.

“My home is in Rwanda so I knew that China already has a big presence in Africa and is important to global affairs, so being able to study there and form a network of connections as a Schwarzman Scholar would help me help my country. I could potentially affect the growth of the African economy because I could become more a more analytical and open-minded leader and policy maker.”

All in a name
Her interest in helping her country—and its agriculture policies—dates to her childhood. While her younger brother Songa Willy Smart remained with their mother Mukandoli Albertine in the suburbs of the capital city Kigali, Vanessa sometimes tagged along business trips with her father Sebarinda Cyrille to visit Rwandan rice fields.

“I was a child myself and I played with the kids there, but I also observed that the farmers were mostly women sometimes with babies on their backs while also handling two or three other tasks at once. I wondered, ‘What are the aspirations of their children? said Giramata.

“I talked to my dad about it. He told me I could work in the agriculture industry to make it better and more efficient for everyone involved. He added, ‘You understand you wouldn’t go into it necessarily for the money’ which made me smile because he had given me the name ‘Giramata’, which means ‘be prosperous’.

“But I understood what he was saying. I realized, even though I was young, that a college degree was a must for my future.”

Education had always important to her. She became multilingual by speaking the Rwandan native language of Kinyarwanda, attending a French-language elementary school, and learning English by watching movies and imitating accents and picking up vocabulary. She seized opportunities beyond the classroom, such as participating in a high-school project on a school farm. There, she met, Ben Henson, a mentor from Oregon who told her about agricultural economics and Washington State’s program in it.  When it was time for higher education, she applied to WSU with a Rwandan Girls Initiative scholarship for college in hand. She traveled to Pullman with a classmate and started her studies in 2016.

Her WSU experience
“If you have to go to college far from home, the WSU community makes it more than just bearable, it makes it nice,” said Giramata. “It’s easy to make lots of connections and people are welcoming, kind, and supportive. My economics professors made learning even difficult subjects enjoyable.

“Economics has been just right for me, because it puts decision-making in need-to-know contexts. I can understand how subsidizing taxes for farmers, for example, helps to keep them out of poverty, and more, what impact such a policy makes on the Gross Domestic Product. And so on.”

Thanks to her studies, she can see how her early interest in farming has stuck with her. In Rwanda, she said, 60 percent of subsistence farmers are women, but their work is underappreciated while they contribute so much more than is talked about or brought to light.

“We must promote education and equality and show how much women are already contributing.”

Giramata said that applying for the Schwarzman has been one of the many highlights of her WSU college career. She’s also enjoyed being an Honors College and College of Agricultural, Human and Natural Resource Sciences ambassador, co-founding a French language club, and being a teaching assistant and tutor for economics and econometrics courses, among other accomplishments.

Taking her knowledge home
Upon WSU graduation in May, Giramata said she will continue her education, focusing on international development to discover how rural and agriculture-heavy communities can solve complex decisions together. She thinks that her future will involve policy, analysis, and serving community needs in Rwanda. She may work for an agency, company, or the government, or she may teach at a university.

“I’ve experienced firsthand how education can turn a life upside down in a good way. It sharpened my mind, helped me see my role in the world, and to plan how to make contributions bigger than myself.”