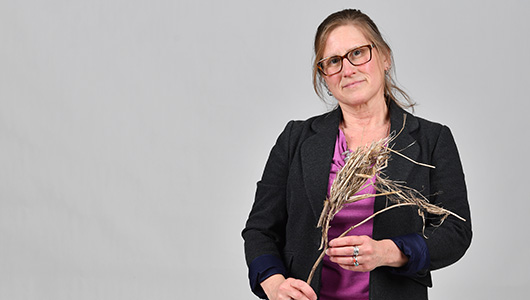 Walking along the soggy banks of the Palouse River near Pullman, Washington, Linda Russo listened to the squish of mud under her feet and felt the cool wetness seep into her shoes. As the water rose around her heels and toes, her mind was flooded with thoughts about the past, present, and future of the riverfront and other “wild edge” spaces.

“Almost 11 years ago, I went down to the muddy Palouse riverbank and my feet sunk in, setting a course,” Russo said about the genesis of EcoArts on the Palouse, her newest community project which brings together environmental history, ecology and creative expression.

The Palouse in eastern Washington and western Idaho is a roughly 5,000-square-mile bioregion, once home to the Palus Band of Indians and the Nez Perce Tribe and now a landscape dominated by wheat, lentils, and other large-scale agriculture. The map-based EcoArts on the Palouse is an expandable online platform for gathering and sharing information and artistic insights about the region’s remaining natural spaces.

The website launch was funded by an arts and humanities grant with support from the College of Arts and Sciences, where Russo is a clinical associate professor of English and director of the Creative Writing Program.

Working with students and faculty from across the university and members of the wider community, Russo, who is also an accomplished poet, launched the innovative site to provide a public stage for interdisciplinary, place-based research, education, and artistic reflection.

“EcoArts on the Palouse invites the community to engage in exploration, discussion and discovery of the Palouse’s wild edge spaces by calling out the details in the languages of environmental science and different creative and healing arts to see what image of the landscape emerges and what new connections might arise,” she said.

Web users can select from a growing number of public parks and natural spaces identified on a map of the Palouse to find text and images contributed by naturalists, creative writers, and visual artists describing the specific place not only in terms of ecological relations and histories but through creative and imaginative processes as well.

Creative contributions – such as artist Annie Cunningham’s photograph of a beet-red swath lying atop a field of lush, green wheatgrass – help illustrate and expand understanding of historical and ecological facts – such as less than 1% of native Palouse Prairie remains intact.

Collaborating across disciplines
Combining experiential learning and community outreach goals, graduate and undergraduate students in the humanities and natural sciences worked together to conceive and design the site.

Kayla Wakulich, who is working toward her doctoral degree in environmental and natural resource sciences, teamed with students in English, digital technology and culture and other fields to write and edit content, conduct fieldwork, research the local ecology, and contribute creativity.

“This tool has the possibility to bring science, conservation, environmentalism and biology to everyday objects, meanings and places,” Wakulich said.

“It helped me recognize the need to translate science in the form of art. I often felt I have neglected the artistic side of myself in order to pursue science, but I came to learn through this project that they are tightly interwoven instead of parallels,” she said.

The collaborative efforts of many community members, including ecologists, biologists, writers, artists and students, “helped create this new lens onto place, one that is accessible to anyone with internet access and that benefits the much wider community,” Russo said.

A similarly collaborative, cross-disciplinary current runs through Russo’s other teaching and outreach activities. The projects allow her to reach students inside and outside the humanities and to help them engage with complex, challenging ideas.

Sharing in a ‘judgment-free’ zone
Open Mic at Café Moro gives poets, actors, musicians and others in the community a welcoming stage for presenting to and connecting with the public. Since 2015, Russo has co-hosted the monthly event in downtown Pullman—now online to accommodate social distancing—encouraging her students and others “to step outside their comfort zone and share their creative work with an audience that includes community members and students of all ages, disciplines, and backgrounds.”

Mo Gehrke, a junior in elementary education from Vancouver, Washington, and Aidan Barger, a freshman in English from East Wenatchee, Washington, were among several students, faculty and alumni who tapped their creativity recently before an appreciative Open Mic crowd.

“I really like reading at Open Mic because it is such a judgment-free space. Everybody encourages everybody,” Barger said. “It’s a great space to share poems I have mixed feelings about or that I’m working on—and to see my work in a new light.”

The vivid descriptions of local scenes in two poems Barger read prompted calls for making them public on the EcoArts website as well. His “Sunday Walk” begins:

Yesterday our names were orchids,
and we grew in the slick mud
between the railroad ties beside the Palouse River.
Our legs, stalks of wheat grown somewhere
central to the soil, the earth, the sun,
slid through fields of glacier lily and ballhead waterleaf
with the ease of yellow rails slipping
through marsh grasses….

At the end of each Open Mic, Russo reads aloud an original, collaborative poem composed by the audience using lines derived from the evening’s presentations.

Linking literary and visual arts
In yet another of her interdisciplinary, community-minded projects, Russo recently collaborated with the Jordan Schnitzer Museum of Art at WSU that gave her poetry students a chance to gain literary insights to visual art and gave museum-goers a chance to experience visual art in a literary way.

In its fifth year, the project, titled “Ekphrasis: Image & Word,” challenges the students to choose a work of art displayed at the museum and to reimagine it through ekphrasis—a poetic or literary description of something visual.

“The students are asked to speak, through their writing, to the image and to allow the image to speak to them while contemplating the artist’s thoughts, materials, and process,” Russo said. “I love it because the writing always goes somewhere no one could anticipate.”

This year, the museum printed copies of the students’ poems and essays for visitors to read while viewing the artwork. It also hosted the students for a public reading of their creativity beside the art they described.

“The ekphrasis project illuminated and deepened the experiences for the museum’s visitors and for the students involved,” said Ryan Hardesty, JSMOA curator of exhibitions and collection. “Our longstanding partnership with the Department of English is based in collective and interdisciplinary education. The museum is a place for expansive creativity, a place for many voices and perspectives to share and learn together,” he said.

Nora Loney, a senior from Puyallup, Washington, majoring in both political science and English, chose to write about Frank Stella’s vibrant abstract painting “Feneralia” (1995). The bright pops of color Stella used in the piece were what first drew Loney to the painting, she said.

“I knew right away that it was an abstract piece and that it might be a little more difficult to write a poem about it. But as I looked at the painting and its red netted sections, it began to remind me of ocean life and I began to see jellyfish in the center and the left corner of the piece and a red, elegant fish in the center. This then led me to imagine what this sea life would be doing as they floated along, and I constructed a narrative around the painting. I really enjoy what I ended up with; it reminds me of a nature documentary.”

In her poem “The Dance Has Begun,” she describes the action she sees in Stella’s painting:

…There, the jellyfish drift
through the water
with their own partners
a disorganized courtly affair
of tangled tentacles
and the flash of fishy skirts….

“Although the black Orb grabs the attention, when you continue to stare at the drawing, the more textures and intentional drawings are revealed,” Schreibman said. “I had the realization while looking at the drawing that a piece of art doesn’t have to be a physical thing or have a meaning to be important. For example, in poetry, one shouldn’t focus on the meaning of the piece but the emotion it evokes.”

A history of connecting diverse disciplines
Recipient of the CAS Mid-Career Achievement Award in 2019, Russo has received a number of creative writing fellowships and has presented her work across the U.S. and abroad. Her growing list of publications includes a collection of essays, three books of original poems, and numerous articles in magazines and journals.

Her creative and scholarly writing is often site-based, involving fieldwork and intersecting with themes in environmental studies. She recently co-edited two books in environmental and geo-humanities, including Counter-Desecration: A Glossary for Writing Within the Anthropocene, a resource for exploring contemporary ecological issues in a global context.

Working in the pioneering, interdisciplinary field of environmental humanities and the practice of ecopoetics, Russo hopes “to open new conversations and understandings about human relationships with other species,” she said.

Samples of her work in ecopoetics, geopoetics, and site-based creative writing can be found on her blog, Inhabitory Poetics.

“Especially now, as sheltering in place has many of us aching to get out, and for those of us who find company in or feel comforted being out of doors and exploring the local wooded areas and waterways, it’s important to remember that when you enter these wild edge spaces, you are setting foot in a terrain that is already alight with a complex web of ecological relations,” Russo said. “An abundance of creatures are carrying on with their lives, and we are mere visitors.”