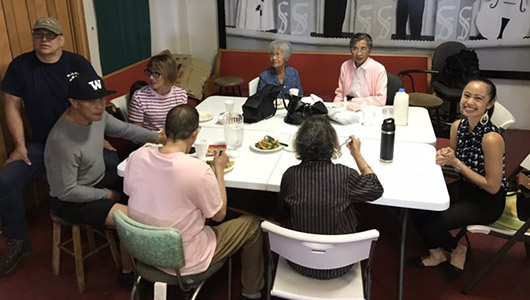 Living in Pullman while working on her graduate degree, Tabitha Espina yearned for the people, and the lumpia and adobo, that she grew up with in Guam. That all changed when she joined the first cohort of WSU’s grant-funded project, “Reimagining the 21st Century Land-Grant PhD” and began working with a community of Filipino and Pacific Islanders in Wapato, Wash. on a case study in public engagement.

“From this very small project—basically me wanting to find Filipino community close by and finally have Filipino food again—came the opportunity to talk about the humanities landscape more broadly, from a state level and eventually a national level,” says Espina, who recently defended her dissertation and will receive her PhD in English.

The path to a conventional doctoral degree can be narrow and isolating, but Espina’s work project carried her into a position as a graduate fellow with Humanities Washington, and then into professional development workshops with the Modern Language Association. These experiences further opened her eyes to the opportunities for service her education could offer.

“I’m now engaged in outreach to Asian Americans and Pacific Islanders throughout the state, addressing the gap in opportunities in the humanities for these groups,” Espina says. “Before this project I would have never considered a career outside of academia. Now I’m able to see the ways we can have a profound impact on communities. As a grad student you can sometimes feel limited in your options and your agency, but this program helps you see your potential.”

This spring marks two years since the project was launched by English professor Todd Butler with the support of an $18,000 matching grant from the National Endowment for the Humanities. The initial venture has grown and morphed into the WSU Publicly Engaged Fellows (PEF) program, a semester of programming for a small cohort of grad students designed to help them re-imagine the content and aims of their education. Once they’ve done so, the PEF then helps students develop opportunities for funded work with rural and underserved populations.

“It’s introducing them to a new mindset, ethos, and skills to engage outward with the public in equal and equitable ways,” Butler says. “Graduate students come to WSU knowing they’re going to a state school, but they don’t always understand what it means to be at a land-grant institution. They leave the program with a revised understanding of the greater purpose of being in grad school and how service and scholarship can be combined to shape a meaningful career.”

History PhD candidate Nick Martin was on a straight track toward a career as a professor. But as a Publicly Engaged Fellow he has begun partnering with WSU’s Plateau Center to work with its Native Youth Exploring Higher Education agenda, and to expand it to include more arts and humanities programming. He’s also working on learning the needs of the tribes in the region and how they might be served through WSU’s Global campus.

“Being a history major, I honestly didn’t know if I was properly suited for this type of project,” Martin says. “This has re-framed what the university means to its community, and it’s a great program for a place like WSU. There are communities here that we can serve and help out and there are avenues to do that.”

Now organized by the WSU Center for Arts and Humanities, the Publicly Engaged Fellows program is a partnership between the Graduate School, the College of Arts and Sciences, WSU Extension, and the Institute for Research and Education to Advance Community Health. Representatives from all these groups, as well as the WSU Libraries and multiple departments, joined students and alumni on the initial grant project and also remain actively involved in its ongoing work.

With the help of a new grant from the Spencer Foundation, Butler is now working on bringing together teams of faculty from land-grant institutions from throughout the West to discuss how connecting the humanities and Cooperative Extension can advance publicly- engaged research. Eventually he’d like to create a regional network of universities who are reimagining the possibilities for education and their communities.

For students like Espina, however, the program has already exposed pathways that had been obscured by tradition and standard procedures.

“The trajectory for grad students is seen as tenure-track position, research and teaching,” Espina says. “In the landscape we’re in, that’s not a feasible option for everyone, and I don’t think it should be. This program helps you see more possibilities for your research and teaching and opens up avenues for other industries and opportunities.”

By Todd Mordhorst, Office of the Provost