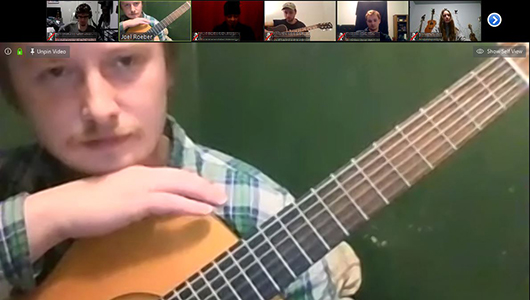 As many artists have done in the face of crisis, Joel Roeber, a songwriter and music student at WSU, turned to his art as a way to process his thoughts and feelings about the coronavirus pandemic and to help others cope.

Roeber’s new composition, “Crown of Fear,” is a gently unfolding instrumental jazz tune written in response to the anxiety and hardship brought by the virus. He also named the song in reference to the virus – “corona” means “crown” in Spanish and Latin.

“I’ve been working on it throughout this whole social distancing thing,” he said. “It’s meant to be a reflection of the state of affairs and what’s going on in people’s minds. Uncertainty is a big theme, so it has a lot of unexpected twists and turns.”

Roeber, a senior from Spokane, Washington, performed “Crown of Fear” during a recent Songwriter’s Roundtable, hosted online by his teacher and mentor, music instructor Gabe Condon. Seven other WSU student musicians also presented their original compositions and joined Condon and fellow music faculty member Horace Alexander Young in providing feedback about everything from lyrics and chord progression to marketing potential.

Song topics and inspiration ranged from a jail break to heartache and COVID-19 fears to the joys of a simple life and a new career. Performed on acoustic or electric guitars and one as a pre-recorded electronica piece, the new works spanned a variety of genres and styles.

“The breadth of material was awesome and inspiring,” Condon said.

Bringing composers together from across campus and beyond

To accommodate social distancing, the roundtable gathered via video conference, with the performers joining from living rooms and bedrooms in their homes scattered across the Pacific Northwest. The novel format allowed Condon to invite a wider audience than previously anticipated – including high schoolers and teachers at a New Mexico arts school – to connect and learn about the art of songwriting.

He conceived the roundtable as a way to bring together composers from across the university to network and share ideas and insights.

“It’s a unique forum for students from any discipline to meet, socialize, and perhaps form new musical ensembles or other collaborative projects,” he said.

On Tuesday, April 28, at 5:30 p.m., Condon and Young will lead a second Songwriters Roundtable. Students from across WSU are welcome to perform by sending a demo of their work to Condon at gabriel.condon@wsu.edu.

Music educators from around the country will be invited to participate as audience members, and the event will be livestreamed on the School of Music’s YouTube channel.

Adapting to social distancing, remote instruction
Condon and Young originally intended to hold the Songwriters Roundtable with a live student rhythm section to perform the students’ works, but since WSU’s transition to remote instruction, they needed a new way for students to present their songs.

“This turned out to be a wonderful alternative since it allows a group of songwriters to perform, listen to others’ songs, receive feedback from Professor Young and me, and participate in a discussion about the songs,” Condon said.

Although many of the students who performed also study individually with Condon, to hear them in a different context, performing their own compositions in a singer-songwriter style, was a bonus, he said. “It helps me as a teacher to guide them in developing their personal musical voice.”

New songwriting course to debut this fall
Working with Young as his mentor, Condon has developed a new course to debut at WSU this fall titled “Songwriting” (MUS 496 Topics in Music). The capstone experience will be a performance and recording of the student compositions.

He is also working with students to launch a WSU club for songwriters this fall.

“While the current circumstances are challenging, I’m excited about developing new ways to enrich students’ educational experience, including utilizing online platforms. There are advantages for students, including the ability to review material on a flexible schedule and from various locations,” he said.

Music to unite and improve lives
Condon, who joined the WSU music faculty in August 2019, teaches classical and jazz guitar and maintains an active career in music performance, composing, and arranging.

“During difficult times, music unites us, and this is a great way for students to come together and bond through music,” he said.

Partnering in the roundtables with Young was a natural fit, he said. Young teaches saxophone and jazz studies at WSU and is a highly accomplished recording and touring artist skilled in composition and on an array of instruments.

As the first roundtable was coming to a close, Young gave the rising composers some encouragement and guidance. “As musicians we are here to make other people’s lives better,” he said.

Alone with his six-string in his lap, Roeber looked at the faces of distant classmates, mentors, and friends and names of other virtual audience members on his computer screen, and humbly described his enchanting song “Crown of Fear”: “It’s pretty sad,” he said, “but, at the same time, I wanted it to be soothing to the soul.”

Top photo: WSU senior and songwriter Joel Roeber absorbs feedback about his original tune “Crown of Fear” after performing it for a virtual audience in the first Songwriters Roundtable.

–By Adrian Aumen, College of Arts and Sciences