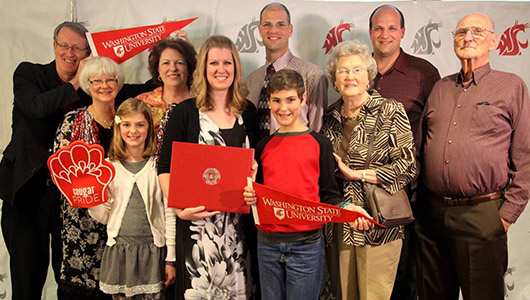 WSU has been a major part of Steve Garl’s life from when he began his college career to his working life today. Throughout those more than four decades, another force has also always been there: family.

“My mom and dad played a big role in encouraging me to get my degree. I also wanted to be a good example to my siblings. I got a lot of support from all of them, and that went a long way.”

Steve grew up in Tacoma, Wash., one of five children of a railroad engineer (his father) and an all-star bowler (his mother). Though his extended family had been working for the railroad for generations, Steve’s parents encouraged him to make his own way in life and pursue his dreams through higher education.

Inspired, Steve move to Pullman to attend Washington State University. Initially interested in architecture, he eventually decided to earn his degree in mathematics and pursue a career as a teacher. Like his mother, Steve also pursued bowling, becoming part of the WSU bowling team and placing 5th at nationals in 1975.

Steve’s world was rocked in his sophomore year, when his father passed away from a heart attack. However, instead of discouraging him, Steve says this tragedy gave him more motivation to persevere and complete his degree.

“I wanted to honor my dad by finishing what I started. That was a big reason for me. As I continued, I realized that I also wanted to make a difference in the lives of others and in their communities through the power of education.”

In 1977, Steve walked in graduation with his bachelor of arts in mathematics and teaching credentials. He applied for a job at WSU in 1979, where he would work for more the 40 years. Today, he works as a project specialist for WSU Academic Outreach and Innovation.

Steve has also seen his college success inspire the family that has come after him.

All three of Steve’s children followed in Steve’s footsteps and have earned their four-year degrees, two of them from WSU. His children’s two spouses also graduated as Cougs. Some of his children have also earned advanced degrees.

Steve and his wife of nearly 43 years are also about to see a third generation of their family enter the world of higher education. Their first grandchild is exploring colleges and planning to attend in 2021.

“The key we have told them all along is to find out what motivates you – find out what your passions are and explore those things.  Then, push yourself, because you can do more than you think.  Have a vision, work hard, believe in yourself, and never give up!”

Top photo: Steve Garl (far left) with his family at a WSU Global Campus graduation reception, celebrating the graduation of his daughter Janna Carter (center left with diploma) in 2015.