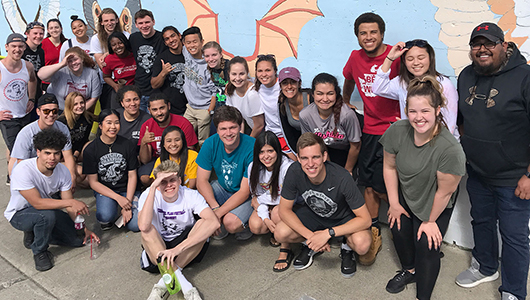 In a first of its kind study at WSU, students taking introductory biology coupled with a service-learning project performed better academically and had improved first-year retention rates compared with students who did not participate in service-learning. The differences were most profound among first-generation and multicultural students.

The study titled “Service Learning as a Portal to First-Year Student Success”, is a collaborative project between the Center for Civic Engagement (CCE) and the School of Biological Sciences (SBS), and involved about 2,200 students taking Biology 102 during the 2018 and 2019 academic years. The study was supported by the Student Success Seed Grant managed by the Office of the Provost.

Service-learning refers to learning that actively involves students in a wide range of experiences which often benefit others and the community, while also advancing the goals of a given curriculum.

Important of intangibles
Going into the study, SBS professors Paul Verrell and Lisa Carloye were skeptical that a single service-learning experience incorporated into their course would have any discernible effect.

“That we found a statistically significant effect both surprised me and enthused me,” said Verrell. “I was long aware of the challenges faced by first-generation students being one myself, and so I was extremely pleased to see how well they benefited from one simple intervention.”

Carloye added, “The biggest takeaway for me is the importance of intangibles in student learning. I’ve always tried to infuse a sense of community in my classes and this study supports the importance of those types of connections both inside and outside the classroom.”

Equitable and inclusive
During each of the four semesters of the study, half of the students taking Biology 102 completed a standard set of lab exercises, while the other half had one lab session replaced by a service-learning experience coordinated by the CCE. Students were free to choose their own service-learning projects, few of which were connected to the subject of the class.

Carloye said the students took the service-learning projects in stride and seemed to enjoy the change in routine from their regular lab session.

CCE faculty consultant Jessica Perone said a typical project lasted about three hours and involved interactions with peers and community members. Upon completion of their projects, students were required to reflect on the meaning of the experience given their personal values, and how their values influence their future goals.

A good investment
The data was analyzed by Michael Cleveland, associate professor and chair in Human Development. It shows that relative to the control group, students who completed a service-learning project achieved higher academic performance, with end-of-semester class grades 9.7% higher, and a 9.9% boost in end-of-semester overall grade-point-averages. In addition, fall-to-fall retention was 9.3% higher for the service-learning group compared with students in the control group.

The researchers said this is a remarkably strong effect for such a small and simple intervention, noting that it provides strong support for the inclusion of service-learning into existing first-year programs, or as components of early and near universal classes such and English 101 and history 105.

Perone said the results of this study are very motivating to continue to find new ways to expand service-learning programming. She sees a variety of ways the project can be expanded systemwide.

“This project is a great example of Academic and Student Affairs collaboration and the CCE is open to partnering with other first-year classes,” Perone said.

Verrell described the collaborative project as seamless because everyone involved had a common goal of optimizing student success. Carloye added that it was nice to be at the table where many different perspectives on student lives were shared.

“I think these sorts of collaboration can be very productive and enrich the WSU experience for all of us—students, faculty and staff,” she said.

Michael Highfill, executive director of the Office of Academic Engagement, said the project, which was developed by Verrell, Carloye and former CCE Director Melanie Brown, checked all the boxes for the Student Success Seed Grant.

“It aimed to increase student engagement, get more students involved in high impact practices, and increase student outcomes,” Highfill said. “It has been a really good investment for WSU.”