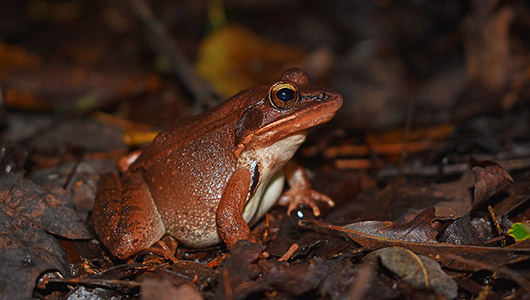 Even the anti-freeze frog is not invulnerable to stress, according to a new study led by WSU biological sciences researchers.

“We’re seeing these mass mortality events in wildlife that are often due to infectious diseases; while at the same time, we notice an association with some kind of environmental change,” said Emily Hall, the lead author on the study, which was part of her PhD dissertation.

Published in Proceedings of the Royal Society B, the study found that wood frogs, known for their ability to survive being frozen through, are more susceptible to lethal ranavirus infections if they have been raised in ponds high in salinity from road deicer. The findings lend more weight to the stress-induced susceptibility hypothesis, which could help explain dramatic wildlife population declines in recent years.

The researchers studied wood frog larvae in ponds in the northeastern U.S. where the use of salt as a road deicer is common. Originally, Hall was interested in the effect of road salt in ponds on the frog’s development, but at some of her study sites, all the tadpoles simply died.

“It’s really dramatic when you go to a pond and suddenly all the little tadpoles are floating on the surface,” Hall said. She discovered they had died of ranavirus, a common viral pathogen that healthy wood frogs often survive.

Working with her advising professor Erica Crespi, who specializes in stress physiology, and Jesse Brunner, a disease ecologist, Hall started a new study using a combination of field work and lab studies to look at the potential link between the stress of salinity and susceptibility to infection.

The researchers found the animals who had been exposed to salt had 10 times more intense infections when exposed to ranavirus. The salt-water tadpoles were also more infectious, shedding five times as much virus into the water as infected animals who had grown up in freshwater without salt added.

The researchers did not see an increase in the frogs’ corticosteroids, stress hormones, just from salinity. It was only with the virus infection did they see the magnified hormone levels and that inhibited the immune response.

This finding has implications beyond the small northeastern ponds, said Crespi.

“We may be studying an amphibian-pathogen system, but what we saw is being played out right now with the COVID-19 epidemic,” Crespi said. “Chronic non-lethal stressors can cause health outcomes that we aren’t aware of until a crisis happens. People, who are in constant socioeconomic stress or have higher incidence of metabolic disease or asthma, are experiencing more severe infections and higher incidence of mortality. That’s also what we saw in our salty ponds.”

The WSU study also has implications for how scientists approach wildlife conservation and mass die-offs of species. Unlike other species of amphibians, the wood frog is not experiencing major population declines. It is a common, usually resilient frog with a range that extends from Alabama to the Arctic. Mass mortality events from the virus have been observed in many parts of the world, but why one population experiences a die-off and not another is an open question. Researchers hypothesized that underlying poor conditions that elevate stress could play a role in where these mortality events occur.

“Since wood frogs are not a species of concern, people might not consider this a conservation story, but I do,” Crespi said. “No one predicts die-offs. It’s not a linear progression of decline. It’s always a confluence of multiple things that act synergistically to cause an outcome that’s more severe than expected. We should consider looking at preventative medicine in conservation.”

Practicing preventative conservation would require monitoring populations, evaluating the complex relationship of stressors and health threats as well as looking for ways to reduce the threats, Crespi said. In this case, the researchers recommended that road crews look for opportunities to reduce the use of salt in winter road treatments while balancing safety, such as using gravel as is done in parts of the Pacific Northwest.

This work was supported by funding from the National Science Foundation, an EPA STAR Fellowship, and Sigma Xi Grants in Aid of Research as well as the Elling Endowment and the Natural Resources Conservation Endowment Fund at Washington State University.