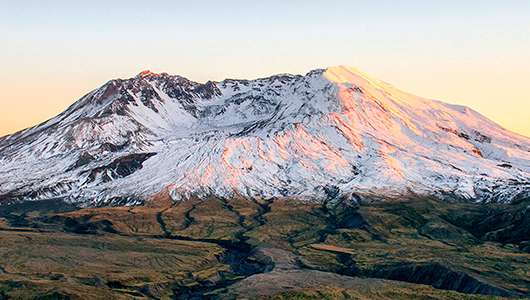 When Mount St. Helens erupted on May 18, 1980, it leveled more than 230 square miles of forest, but it also opened a rare scientific opportunity to study how an ecosystem responds after an extreme disturbance.

WSU ecologists John Bishop and Mark Swanson have been involved in Mount St. Helens long-term research for decades and are preparing for the next generation of work. They each focus on different areas affected by the blast. No matter how severe the damage on the landscape, life has found a way to return and brought valuable insights with it.

“If we want to understand the natural processes of how plant and animal communities come to be and change, the best way is to watch that process unfold over time,” said Bishop, WSU professor of biological sciences. “Mount St. Helens is a nearly ideal place to do that.”

Over the last 30 years, Bishop has studied plant regeneration on the most heavily impacted area just north of the Mount St. Helens crater, the Pumice Plain, where everything was buried by the largest avalanche in recorded history.

While some places were buried by as much as 600 feet of rock, plants are growing, primarily hardy, purple-flowered lupines. Their success has also attracted a host of moths, and Bishop’s research has focused on how insects can change the course of revegetation.

“These are simplified systems with relatively few species, so there aren’t many buffers,” said Bishop. “The moths find a patch of isolated lupines, but the predators don’t find the moths. For a while, the moths have free rein, and they eat themselves out of house and home.”

Willow shrubs are also starting to populate the area, but they have developed a similar problem with an invasive weevil that eats their stems. Bishop set up plots to study the weevil’s impact and found that where the insect was controlled, willows were able to grow larger, turning from shrubs into trees.

The landscape is more varied where Swanson works in the larger area surrounding the Pumice Plain. Here the eruption toppled hundreds of thousands of old-growth Douglas-fir and other trees and coated everything in ash and pumice. Still, small refuges of plants and animals survived under patches of snow or in the soil, and the original, native plants, such as lilies and huckleberries, continue to grow there, joined by many new disturbance-adapted species like fireweed.

“It’s an incredibly diverse landscape,” said Swanson. “You can just walk a few meters within the blast zone and find yourself in very different plant communities.”

Swanson, now a WSU associate professor in the School of the Environment, started research at Mount St. Helens in 1997 as an undergraduate at the University of Washington studying under ecologist Jerry F. Franklin, one of the first to conduct research after the eruption. The studies done by Franklin and his colleagues have helped improve scientific knowledge of the biological legacies left by all kinds of disturbances including fire, floods and timber harvests, Swanson said.

Today, Swanson is part of a new collaborative research team that is taking over responsibility for the research plots that Franklin and his colleagues started. The plots are on secondary succession sites, meaning there were substantial legacies from the pre-eruption ecosystem, including forest soil, downed woody material, standing dead trees, and surviving plants and animals.

The researchers will continue to conduct sampling at the sites, which has occurred every five years since 1980, to study plant community composition, structure and dynamics. The next sampling is planned for this summer, although it could be postponed due to COVID-19 concerns.

“We have a really good team,” said Swanson. “We’re interested in what we can learn from this disturbance, especially in the context of changing climate and land use needs.”

Bishop has mentored many graduate students who have worked on the Pumice Plain, including WSU Ph.D. student Rebecca Evans who is looking at the impact of nitrogen, a common environmental pollutant, on willow growth and its resistance to pests.

“Some of the key scientists have retired or will be retiring soon,” said Bishop, who has his own retirement in sight. “We want to see people continue to work in this place and build on what came before.”