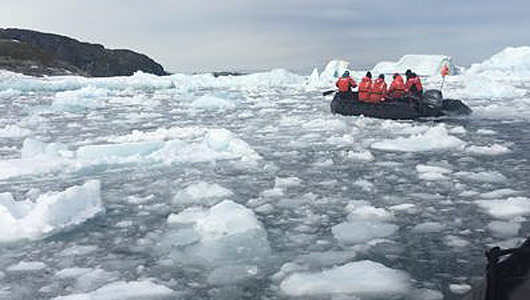 In February, Scott Hotaling, a postdoctoral researcher in the School of Biological Sciences, found himself on the adventure of a lifetime as part of a month-long research expedition to the Antarctic, followed by the uncertainty of returning to South America just ahead of travel restrictions put in place to slow the coronavirus pandemic.

The opportunity to came out of the blue in December from a colleague who was organizing an expedition to study the Antarctic Midge, the largest insect living in Antarctica. There was not much time to prepare, but Hotaling was able to get organized and obtain the required medical approval in time.

For the duration of the six-week trip from Punta Arenas, Chile, to the Antarctic and back, Hotaling and the research team lived on board the Laurence M. Gould (LMG), an ice-breaking ship operated by the National Science Foundation.

In order to reach the frozen continent, they had to cross the notorious Drake Passage, home to some of the world’s worst sea conditions. “Luckily, ‘the Drake’ as everyone calls it, wasn’t bad on the way down, but on the way back, we had 48 hours of serious rough seas that made it hard to move around, eat, sleep, really do anything,” wrote Hotaling.

It took the LMG three days of southbound travel to get the first glimpse of the Antarctica. For the next month, the team traveled along the west side of the Antarctic peninsula, stopping on the mainland and outlying islands to sample populations of the Antarctic Midge. Small 10-person inflatable boats called “Zodiacs” were used to transport the researchers from the LMG to the research site. “The Zodiac rides made for a much more intimate experience with the ocean, sea ice, and wildlife (especially the many whales!),” Hotaling explained.

“Our primary research goals were two-fold,” continued Hotaling. “First, we wanted to collect as many distinct populations as we could for a population genetic comparison; basically we want to know how populations are genetically related (as this tells us about their evolutionary history) and if their relatedness corresponds with any environmental variation. Second, we collected live specimens to ship back to the Teets Lab in Kentucky for physiological experiments.”

After spending time in the Southern Ocean, the research team headed north, departing Palmer Station on March 16. At the time, the COVID-19 pandemic was sweeping the globe but leaving Antarctica as the only continent without the virus.

After enduring The Drake’s 25 to 30-foot waves and gale force winds that reached 60 knots on the way back to Punta Arenas, according to James McClintock, an Alabama scientist who was aboard the LMG with Hotaling, the crew learned that Chile might not allow the ship to dock in Punta Arenas due to suspicion of COVID-19 infection.

“Moreover, local Chilean street riots over cost escalations in public transit, wrought with graffiti, broken store windows, street fires and tear gas, had been exacerbated by the fears of the virus. Rioters had blockaded even the port in an ill-fated attempt to keep foreigners, presumed to be carriers, from disembarking from their ships,” McClintock reported in an April article in The Anniston Star.

After nervously awaiting the decision, Chilean officials allowed the crew to dock in Punta Arenas with instruction that nobody was to step off the ship onto the dock. The next morning, after a heated discussion, according to McClintock, the crew was transported in minivans to a warehouse for health screenings and baggage checks. This happened after hearing word that a manager with United Airlines promised a flight out of the country would be made if they were to make it to Santiago, Chile. This came as a relief to everyone because airlines were canceling flights out of Santiago and American Airlines had stopped flying to South America.

The team was halfway to the airport when a transit official informed everyone that they needed to get to the airport immediately because the president of Chile had just declared martial law, according to McClintock. The team was met with an empty airport when they finally boarded their flight to Houston. On March 22, the scientists returned to America not knowing what the future might hold, but ultimately bonded for life by their experience of a lifetime.

Top photo: Research crew being transported by a Zodiacs.

Originally posted by the School of Biological Sciences.