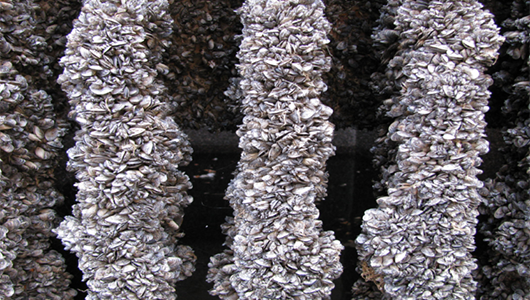 So far, the Columbia River Basin, which spans an area the size of France and includes portions of seven states and parts of Canada, is the only major river basin in the United States that hasn’t been impacted by invasive quagga or zebra mussels. Researchers in the Aquatic Ecology Lab at WSU Vancouver are developing strategies to help keep it that way.

Preventing new introductions, quickly detect new arrivals, and controlling the bivalves’ spread is not an easy task: females can produce a million eggs a year and the size of larvae are measured in microns. Even as adults, the mussels are just a little more than one-inch in size and can easily be overlooked, explained Stephen Bollens, co-director of the Aquatic Ecology Lab.

Keeping the harmful bivalves from colonizing and damaging infrastructure and ecosystems in the Columbia River basin is a high priority. If they take hold in Washington, officials estimate it could cost more than $100 million annually to keep the state’s power and water infrastructure maintained. The mussels could also undo decades of restoration work on salmon fisheries.

Zebra and quagga mussels, collectively called dreissenid mussels, are non-native, freshwater mollusks. They were first discovered in the US in the Great Lakes in the 1980s, probably by hitching a ride in ballast water from ships that came from the Caspian and Black Seas in Eurasia. Since then, they have invaded fresh water bodies and estuaries across North American, causing extensive economic and environmental damage. They’re responsible for clogging pipes and mechanical systems of industrial plants, water and sewer utilities, locks and dams, as well as causing serious environmental damage to native aquatic species and habitats.

Although neither zebra or quagga mussels have yet been found in Washington waters, they have been found on boats transported across state lines. In the past two years, the Washington Department of Fish and Wildlife have intercepted more than 50 boats with mussels attached to them. In fact, recreational boats are considered a primary cause of invasive mussel spread in the United States.

A three-prong approach of detection, control, and prevention is used to ensure the mussels don’t get a hold in the Columbia. Early detection and rapid response are key to successfully control the mollusks and minimize their impacts. Control or eradication efforts are only possible when population densities are low and restricted to small areas. Prevention is much less expensive than trying to control or eradicate the mussels, especially after populations have become well established. The appropriate amount of response is critical, though. The WSU researchers found that the current level of effort being expended in the Columbia and Snake rivers is not sufficient to mitigate the risk through early detection measures.

To address this, Bollens’ team is working to enhance monitoring and early detection through new technologies such as the FlowCam and environmental DNA (eDNA). The FlowCam is an automated microscope and imaging system used to identify and count particles (such as plankton) suspended in fluids such as river water; eDNA is organismal DNA that can be found in the environment and can be used to monitor for aquatic invasive species. Bollens and his Aquatic Ecology Lab colleagues are collaborating with the U.S. Geological Survey’s Upper Midwest Environmental Sciences Center on deploying this technology.

The Aquatic Ecology Lab has mapped access points and routinely samples for larval mussels on the mainstem Columbia River to better understand the potential risk for introductions. If mussels do invade the Columbia, the researchers are working on effective strategies that would minimize the impact to hydroelectric, irrigation and urban water facilities.

Visit the WSU Aquatic Ecology Lab website to learn more about the research and how boaters can help prevent the spread of invasive species.