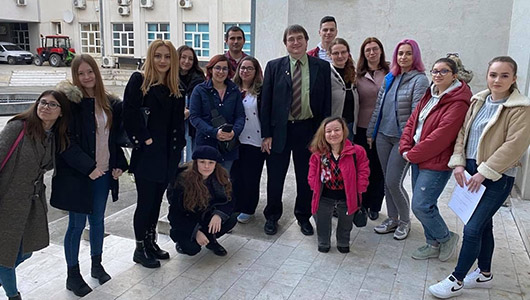 Thomas Preston, a political science professor and expert in international security policy, had just begun a four-month, Fulbright-sponsored teaching stint in Constanta, Romania, when the entire country was placed in lockdown and martial law was declared.

It was early March, the coronavirus was threatening to become a global pandemic and the Romanian government was having as little of that as possible, so officials quickly imposed strict social-distancing regulations nationwide.

“It has been interesting to be under martial law, with the police vehicles constantly announcing from loudspeakers to stay in your homes or risk death!” Preston wrote almost 50 days into the southeastern European country’s 65-day lockdown. “Seeing convoys of disinfectant trucks going past, spraying the streets and buildings with chemicals, also has been unusual, to say the least. But these measures have really been effective, with Romania having only 11,000 cases and 600 deaths, and the peak having already been reached!

“After watching what happened in nearby Italy, it is clear the Romanian government handled the situation well by immediately locking things down and not waiting until there were lots of cases to do something as happened in the U.S.”

‘A surreal experience’
Preston was a few weeks into teaching graduate seminars on political psychology and international security at Ovidius University when the U.S. Department of State suspended the Fulbright program and ordered all awardees to come home. But he and his wife, Leeanne Noble, decided to shelter in-place instead.

“We felt we made the right call, given the solid steps the Romanian government was taking to control the outbreak, and the fact we had a well-stocked apartment where we could self-isolate,” he said.

His Romanian neighbors and university hosts “have been wonderful. So many went out of their way to make sure we had any supplies we needed. Though it has been a surreal experience for sure, we are very glad we made the decision to stay,” he said.

At least a third of Fulbright scholars in Romania chose to remain in the country, Preston said. “And seeing on TV the crowded airports filled with people stuck for hours with no masks, it seemed more likely that we’d become infected there and bring it back home.”

Equipped for the challenge
Even before government orders cancelled in-person classes, Ovidius decided to move all of its courses online, Preston said. Fortunately for him and his students, he had experience in distance education and was well-prepared for the challenge.

In addition to keeping his courses on track, he also continued working with Romanian colleagues on plans to create the Black Sea Institute for Development and Security Studies. The project is part of a proposed partnership between WSU and Ovidius to cooperatively offer a master’s degree in Development, Security and Global Studies at the two universities.

Preston looks forward to sharing with his students and broader WSU community what he learned while overseas and about “the experience of not only living in Romania but riding through the pandemic in country that handled the situation well,” he said.

Isolated but reaching out
As a Fulbright Senior Scholar, Preston’s responsibilities included engaging in outreach to the Romanian public, however, the circumstances made most interactions with the community impossible.

“We go out weekly to get groceries or sometimes walk down to the deserted beach outside our apartment to look at the Black Sea,” he said. “It’s a shame that the wonderful opportunity Fulbright normally provides for meeting people, experiencing the culture and traveling around the country was curtailed by the virus and the resulting travel and social distancing restrictions. Hopefully, the work that I am continuing to do — although not officially under Fulbright any longer — will help build bridges between WSU and Ovidius and I can return in the future and explore this beautiful country more.”

Nonetheless, Preston was pleased to accomplish some public outreach online. While in lockdown, he and Noble, who are in musical bands at home, discovered they enjoy writing songs together and shared with friends on Facebook one of their new tunes, “The Lockdown, Breakdown, Quarantine Blues” – “to lift people’s spirits with music,” he said.

The vice rector of Ovidius evidently shared the video with the press and their story appeared on the national news website, Preston said, “so I ended up doing some outreach to the Romanian public on this Fulbright after all!”

The Fulbright U.S. Scholar Program sends American faculty members, professionals and scholars abroad to lecture and/or conduct research for up to a year to increase mutual understanding across the globe. Fulbright programs operate in more than 155 countries worldwide.

Top photo: Thomas Preston, in necktie, with students in his political psychology class at Ovidius University in Romania.