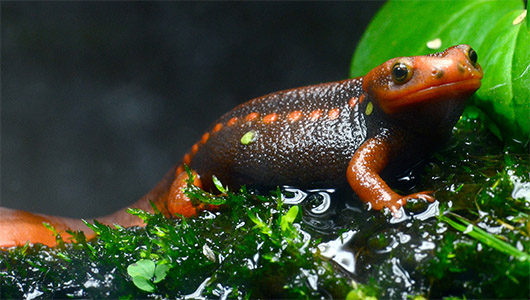 The problem with monitoring the pet trade is one of magnitude: every year more than 225 million live animals are imported into the U.S. alone, with the majority destined for the aquatic or pet industries. Creating a “clean trade” by detecting infections in these populations requires huge sample sizes, a labor-intensive and costly process.

In a paper published in Scientific Reports, Brunner outlines two potential ways to test captive animals for pathogen DNA: batching test samples from individuals and sampling eDNA from the water in the animals’ tanks. The eDNA method proved to be much more efficient, Brunner said.

“The best way to prevent the emergence of these pathogens, and the diseases that come from them, is to keep them from getting here in the first place,” said Brunner. “It’s an important goal but a really hard one because of the scale of the problem. With the eDNA method you are theoretically sampling an entire population at once, so you are more likely to detect whatever is there, and you can do that much more efficiently than with traditional approaches.”

Environmental DNA is already used to look for the presence of invasive species in places like the Great Lakes. Brunner saw that it might also be useful to sample water from the tanks of captive species being transported in the pet trade since infected animals will shed pathogens into their water.

As an example, Brunner used Bsal (Batrachochochytrium salamandrivorans) a chytrid fungus which threatens salamander populations. Bsal is a cousin of the devastating Bd (Batrachocytrium dendrobatidis) that was responsible for the decline of more than 500 amphibian species around the world, including 90 that likely went extinct.

Now Bsal has jumped into wild salamander populations in Europe from imported pets from Southeastern Asia. While it has not yet been found in North America, the threat of Bsal prompted the U.S. Fish and Wildlife Service to enact a ban in 2016 on the import of 201 species of salamanders into the United States, which is home to tremendous salamander diversity.

Brunner’s paper outlines the statistical formulas needed to conduct surveillance of imported salamanders for Bsal using eDNA. It shows the volume of samples needed to be taken and tested to produce a good degree of confidence in a negative or positive result. If proven out, the method could reduce the amount of sampling and work required to effectively monitor for the pathogen. This paper provides the framework for the method, and Brunner and colleagues are currently testing it with real samples.

As part of a Bsal Task Force, Brunner and his colleagues are in conversation with the pet industry which is naturally interested in creating a clean trade for salamanders, but finding better solutions to test for pathogens in salamanders also has broader implications.