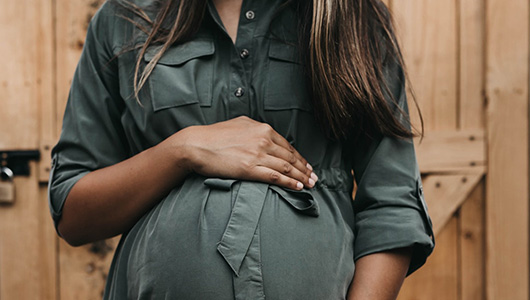 Fears of confirming stereotypes about pregnant workers as incompetent, weak or less committed to their job can drive pregnant employees to work extra hard, risking injury.

“The pregnancy stereotype is a silent stressor. It is not always visible, but it really impacts women in the workplace,” said Lindsey Lavaysse (’20 PhD), lead researcher for WSU recent study of pregnant women in physically demanding jobs.

The study, published in the journal Work & Stress, showed that the majority, about 63%, felt this type of “stereotype threat,” the fear of confirming negative assumptions about a group to which they belong. This threat led many women to conceal their pregnancy and overperform, even taking actions that placed their health and pregnancy at risk, such as standing for long periods or lifting heavy objects.

The study shows the need to acknowledge that these stereotypes exist and help mitigate their impacts, said Lavaysse.

“Most organizations have policies for pregnancy accommodation in place, and it’s a legal right, but if the organization’s culture suggests there will be retaliation or that workers will be looked upon differently, then women will shy away from using accommodations that are better for their health and their safety.”

Lavaysse and co-author Tahira Probst, a WSU professor of psychology, surveyed pregnant employees at three separate points in time over a two-month period, starting with a group of about 400. The subjects were at different stages in their pregnancy and worked in a variety of industries, including manufacturing, health care and retail.

Moreover, fears of confirming these stereotypes also increased over the two-month period.

“Two months is a relatively small window of time, but in the scheme of a pregnancy that’s close to one whole trimester,” said Lavaysse. “As they’re progressing through their pregnancy, their experience of stereotype threat, a significant stressor, is also increasing.”

The researchers note some limitations to the study, namely that the participants were self-selected, and many dropped out before the two months were over. However, this is the first study to establish a connection between pregnancy stereotype threat and workplace accidents.

The authors recommend further research that investigates possible variables that may mitigate some of the negative stigma around pregnancy while working and create better social support for utilizing pregnancy accommodation and maternal leave policies.