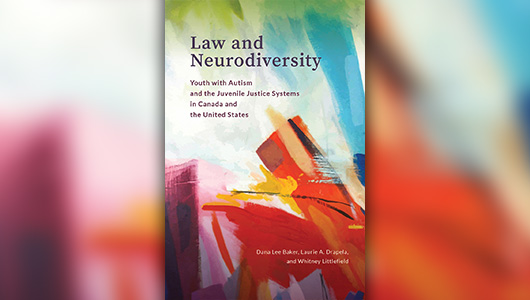 A new book co-authored by Associate Professor of Criminal Justice Laurie A. Drapela offers guidance on how autism research can inform and improve juvenile justice policies in Canada and the United States. Both countries rely on decentralized systems of governance to craft and implement law and policy, but their treatment of detained youth with autism differs substantively.

Published by University of British Columbia Press, the book is titled “Law and Neurodiversity: Youth with Autism and the Juvenile Justice Systems in Canada and the United States.”

Given these obstacles, how can juvenile justice systems fully incorporate neurodiversity to successfully reintegrate youth with autism back into their communities? State and local agencies such as juvenile courts often refer to other jurisdictions when seeking effective problem-solving strategies to avoid “reinventing the wheel.” Drawing on common language, federated systems of government and histories with England, the authors compared Canada’s understandings of autism and integration into juvenile justice practice with those of the U.S.

Both countries exhibit strengths in working with autistic youth, brought about by federal legislation, grass-roots social movements, and in the case of Canada, implementing disability rights declarations from the United Nations. Despite these advances, Canadian provinces and U.S. States experimented with 20th century ‘get tough’ juvenile justice policies disproportionately negatively affecting autistic youth (especially autistic youth of color). In the 21st century, Canada moved toward decarceration and community justice models for all youth, while the U.S. continues harsh tactics such as juvenile detention, school-to-prison pipelines and zero-tolerance delinquency policies. The authors propose enhancing restorative justice and community justice by integrating youth with autism and their families into the legal, social and educational fabric of juvenile justice systems of both countries.