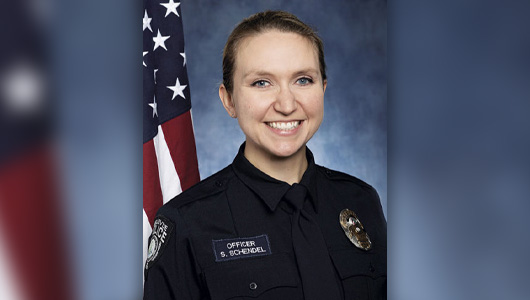 Stephanie Schendel caught the journalism bug in college, spending two years on the staff of The Daily Evergreen and observing Pullman police officers as they responded to calls related to drunkenness, domestic disputes, overdoses—even a stabbing.

“I did maybe a half-dozen ride-alongs,” says Schendel (’12 Spanish, Comm). “They were very patient with me and answered all of my questions. It really impressed me. That was the beginning of it.”

Her real-time reporting experiments, or “tweetalongs,” were popular reads, and they helped launch her career—first as an award-winning crime reporter for the Centralia Chronicle, then as a detective with the Bellevue Police Department.

She covered breaking news, criminal justice, and emergencies such as flooding—and loved it. After a couple of months on the job, an arrest was made in one of the most notorious unsolved Lewis County murder cases. Schendel produced numerous stories—from arrest to trial. Her coverage helped her win the 2014 new journalist of the year award from the Western Washington chapter of the Society of Professional Journalists.

Being a reporter “helped me grow up a lot,” Schendel says. “I definitely enjoyed it and wouldn’t change that life experience and professional experience for anything. Every day was an adventure. And it helped me improve my writing skills and my interviewing skills.”

But, after about two years at the small-town paper, she says, “I was outgrowing my job.” Schendel found herself more and more drawn to the other side of the police beat. “Being a reporter is a lot of fun. But police work is one of the few professions that’s more fun than being a reporter.”

Schendel was hired by the Bellevue Police Department in late 2014, following extensive background checks as well as written, oral, and physical tests. Next came the four-and-a-half-month police academy, followed by three months of field training. Schendel went on patrol alone for the first time in October 2015, working ten-hour days on third shift—4:30 p.m. to 2:30 a.m.

Three years later, she became a training officer. “You become a better cop by training other people,” she says.

That same year, she tested for a specialty position. In January 2019, she started her new role as a detective assigned to special assault in the violent crimes unit. This includes sexual assault and domestic violence. “It’s a heavy subject,” she says. “I’ve learned to compartmentalize, which is really, really key. I have a role and a place as an objective investigator. I focus on what my role is. I’m not here to save everybody.”

Exercise helps her cope with stress. “I definitely have days when I’m emotionally exhausted,” she says. But, “I have a good work-life balance. I exercise at least six days a week. I maintain a healthy diet.” She’s also a regular at her neighborhood dog park. And, she’s engaged to a Kent police officer; they plan to wed in autumn.

Meantime, she’s working multiple cases. “That’s what I like: the variety,” she says. “I want to learn about everything. You go into each investigation with an open mind. And they’re very satisfying cases to solve.”

One of the most satisfying was that of a ride-share driver charged with four sexual assaults in four cities. “He preyed upon individual intoxicated women,” says Schendel, who’s interested in someday maybe working major crimes.

She finds many parallels to newspaper reporting in police work. “As a police officer, you need to interview people,” she says. “You have to write reports. You interact with people you normally wouldn’t. You have to treat people fairly.”