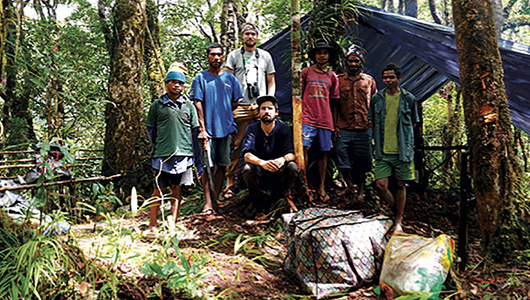 Iridescent little fairywrens drew doctoral student Jordan Boersma to the grasslands of Papua New Guinea, but it was the unexpected generosity of the people that captured the researcher’s heart.

“I’ve traveled all over Asia and never experienced this level of hospitality. If you accept their culture, they’ll really take you in and look after you,” he says.

Hubert Schwabl, professor in the WSU School of Biological Sciences, says Boersma is one of the rare students who is able to do field work under difficult tropical conditions.

“Jordan has worked in Australia and Borneo and is now part of WSU’s collaborative ornithology project with Cornell and Tulane Universities.”

Boersma, who joined the project in 2015, says white-shouldered fairywrens are good models for mate selection studies. The sparkly birds, found only in Papua New Guinea, are easy to observe as they hop around in the grass looking for insects.

“We’re studying this particular bird as the females within this single species show variation in ornamentation,” he says. “A lot of female birds are colorful but it’s rare to see substantial variation in one species. The males are the same across their range but the females vary.”

Boersma says it was the study of elaborate male color traits that led to Darwin’s theory of sexual selection. The theory, however, does not translate well to females.

“As scientists, we’ve been so male oriented over the years—so chauvinistic,” says Schwabl with a smile. The expert in physiology devotes much of his research to the study of female avian reproduction and behavior.

He and Boersma decided to investigate whether or not female fairywren variation was tied to testosterone levels, a hormone present in both sexes. This was not an easy task to carry out in a largely undeveloped country.

“I was a bit guarded my first time in New Guinea—the economy is poor, there are few jobs, and you can’t buy much there,” Boersma says. “It takes a lot of preparation. You need to anticipate your needs for 3–5 months, especially your research equipment.

“But once I get into the rhythm of life there, it’s great,” he says. “There’s not much cell signal in our research areas, so we spend a lot of time having conversations with the local people and becoming part of the community.”

In order to study the birds, Boersma had to make arrangements with the local landowners. He also hired and trained people to assist with his research and gave community presentations on conservation.

“One of our biggest challenges is just getting to the field sites,” he says. “There are only a couple roads and there’s no running water or electricity.”

Along the way, Boersma learned about the local culture, including witchcraft and cannibalism. One day, he happened to jog through a historical battlefield where 100 years ago, rival tribes lined up to throw poisoned spears at each other. Per tradition, any warrior hit by the spear had to submit to being dragged off for dinner. It was considered dishonorable to run away, he says.

“It’s a few hours travel by small boat and the sea is really rough in August,” he says. “Then, local criminals discovered a cache of American World War II weapons and began patrolling the ocean area we planned to cross. They would steal dinghies and tell the owners to jump and swim for shore.

“Luckily, my friend’s extended family was respected by the top pirates, so they helped escort us across the rough seas—we almost flipped from massive waves but we made it.”

Once safely back at WSU, Boersma determined that indeed, elevated testosterone levels are responsible for the female fairywren developing white wing patches. In turn, those females with flashy wing patches defend their territory more aggressively than do unadorned females. It’s a piece of information that cements his dissertation and adds to Darwin’s theory.

But Boersma’s not done yet. He hopes to someday return to his friends in Papua New Guinea.

“Early on, I wanted to provide some sustainable long-term opportunities for the local people to study biology, so they can benefit from their natural resources without having to sell or lease their land to palm oil or logging companies,” he says. “I really want to build a research station—to stay committed for decades, until they can carry it on themselves.”