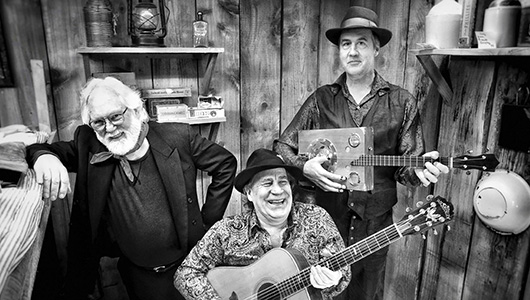 Krist Novoselić, bass guitarist of the iconic grunge band Nirvana, was driving home one day “and there was a billboard. ‘Earn your degree in your pajamas.’ And I was like whoa, wait a minute. I had no idea. I looked at the website [for WSU Global Campus], and I was like oh man, yeah. I got accepted and I signed up for classes and I just started studying. I’d be backstage reading. I really got into it.”

But make no mistake: “Online school is no cakewalk,” Novoselić says. “It’s a lot of work. I’m very confident and happy with the skills I developed through WSU online—researching skills, critical thinking, writing, the scientific method.”

Classmates seemed to “not really” know they had a rock star in their midst. And, Novoselić (’16 Soc. Sci.) says, “it didn’t really matter. I was what they call a non-traditional student, and it seemed like most people were, too. We were all managing our time. It’s our biggest resource, isn’t it? And I have so much going on.”

It took six years to get his degree. Afterward, he thought about law school. Instead, he says, “I got into Giants in the Trees.” The band formed as he was preparing to graduate. Ray Prestegard, vocalist Jillian Raye, and drummer Erik Friend met at Skamokawa Grange, answering Novoselić’s call for a jam session. Their second album, Volume 2, came out last year following their self-titled offering in 2017.

Neighbors and nature
Krist Novoselić was a fan. He had read Wintergreen and wanted to meet the author. Robert Michael Pyle, one of America’s leading nature writers, was nearly a neighbor.

Novoselić enjoyed several of his other titles, too—Sky Time in Gray’s River, Where Bigfoot Walks, Nabokov’s Butterflies—and introduced himself at a book-signing in Skamokawa, near both of their homes in southwest Washington. Not long later, they bumped into each other again.

“By coincidence,” Novoselić says, “I went to a Leo Kottke concert—he was playing in Longview, Washington—and Bob was there.” They ended up at Pyle’s home, sharing stories and beers and bonding over the common values of conservation and community as well as an affinity for rural America.

This was in the early aughts, right around the time Novoselić was getting involved with the Grange. Pyle was a longtime member, and the Yale-educated lepidopterist and legendary bassist continued to get to know each other through the grassroots, fraternal organization.

Planning a program for a Grange meeting led to the lengthy endeavor that became Butterfly Launches from Spar Pole. The album features poetry by Pyle and music by Novoselić. Ray Prestegard, who’s in the band Giants in the Trees with Novoselić, also contributes.

The project is a departure from the down-home Pacific Northwest groove-pop of Giants and the raw, distorted, power chords of guitar-heavy grunge. This folksy, acoustic, spoken-word album celebrates the natural world. Climate change, natural selection, and evolution are all addressed. But the artists don’t aim to preach politics. Rather, Novoselić says, “It’s up to the listener to decide.”

The title comes from the anchor point in early logging setups in the American West. A spar tree, or spar pole—since replaced by portable steel yarders—was chosen for its strength and height. “The spar pole is a kind of symbol of a forest that’s in production for timber,” Pyle says. “It’s also a symbol for the vanishing of the trees. I think it kind of cuts both ways. We’re not going to have forests if we don’t take care of them, but we’re not going to have jobs if we don’t take care of them. We want listeners to think about these things, and we want to present these ideas in a way that’s entertaining.”

The collaboration grew out of a radio show Novoselić used to host. “I’m really into the guitar player John Fahey,” Novoselić says. “I did this reading—basically, there were two turntables going—with some John Fahey on guitar and the other would be like Orson Welles reading the Gettysburg Address or somebody reading Walt Whitman. And it just had a nice feel.”

Pyle, a friend by then, heard the show, and it sparked an idea for the Grange program they were planning. “Bob gave me a call and said, ‘Why don’t you play some guitar and I’ll read some Walt Whitman?’ And I said, ‘No, why don’t you come up with your own poetry and I’ll play some guitar?’ I thought it’d be more interesting,” Novoselić says.

That first guitar-poem, “Notes from the Edge of the Known World”—full of references to flora and fauna—became the cornerstone of the album. “It took ten years,” Novoselić says. “We’d come together and have these flashes of activity, then I’d go back to school—I was doing WSU online—and in between I’d perform with Paul McCartney and Dave Grohl and Pat Smear. That was Sirvana. We won a Grammy. We had Hervana, too, at the Rock and Roll Hall of Fame (with Joan Jett, Kim Gordon, St. Vincent, and Lorde). Or I’d do a show with Beck and Dave and Pat.”

When they found time, they “recorded in a Grange hall, at my house, at an old creamery—with whatever equipment we had around,” Novoselić says. “And, finally, last year we had enough material. We took it to Jack Endino—he produced Mudhoney and Nirvana—and he put it all together.”

Novoselić, already a licensed pilot and published author—his 2004 book, Of Grunge and Government, is part memoir, part political tract—went back to school on a whim. His nephew was heading to community college, and he decided to enroll, too, commuting about an hour each way from his homestead in Deep River before transferring to WSU Global.

Deep River
Novoselić’s Deep River roots go back nearly 30 years. He bought his place in 1992—the same year Nirvana’s Nevermind displaced Michael Jackson’s Dangerous at number one on the Billboard charts and the band won MTV Video Music Awards for Best New Artist in a Video and Best Alternative Video for Smells Like Teen Spirit. Deep River reminded him of Aberdeen, where he spent his high school years—only more remote. “I like the rain. I like big trees. I like space and quiet. And I like Deep River because that’s what it offers. It’s really a luxury to live out here like this.”

When he isn’t traveling for Nirvana reunion shows, Novoselić, who turns 55 in May, sticks close to home and the Grange. He’s master of Grays River Grange and owns the old creamery where Giants practices and parts of Spar Pole were recorded.

Spar Pole, Novoselić says, is “an invitation. I’ve always felt that good art invites you into its world, and that’s what we’re trying to do: capture the mind’s eye. Come inside. It’s really different. It’s not rock. It’s literature. It’s geology. It’s the natural world—life down to the barest cell in terms of time and the environment and mortality. We’re here now, and this is an invitation to the world we made with this work—the rest is open for interpretation.”