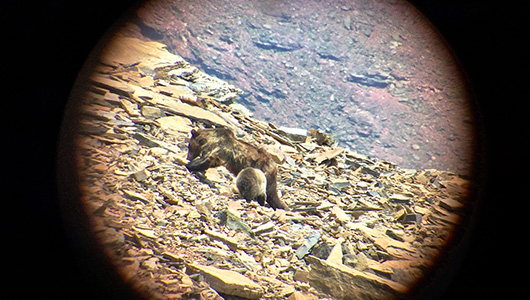 A team of international scientists led by a WSU graduate student are trekking the high peaks of the greater Glacier National Park ecosystem this summer to better understand a tiny but important food source for grizzly bears—the army cutworm moth.

Erik Peterson, a master’s student in the School of the Environment, partnered with WSU professor Daniel Thornton and seven colleagues to collect data, map, and model the alpine habitats where grizzlies forage on moths by the thousands, finding calorie-rich meals in mid-summer.

“Glacier National Park is a grizzly mecca,” said Peterson, a former field biologist for the park. Glacier is a microcosm for the Northern Continental Divide Ecosystem, which includes Waterton Lakes National Park in Alberta, Canada, and Akamina-Kishinena Provincial Park in British Columbia and is home to as many as 1,000 bears.

‘Bear butter’
Grizzly bears eat up to 90 pounds of food every day during summer and fall to put on enough body fat for their winter hibernation. They maximize body weight by choosing a mix of carbohydrates, protein, and fats.

In the 1930s, Glacier Park climbers noticed grizzlies foraging near the top of a high peak, digging for something among barren, rocky slopes. By the 1950s, biologists realized they were dining on army cutworm moths.

As caterpillars, army cutworms devour grain crops, alfalfa, and canola. In high summer, adult moths migrate into high mountain areas, where they feed on alpine wildflowers at night, and nestle in crevices on high, rocky talus slopes by day. Hidden from the sun, they stay cool and safe.

Safe, that is, until a hungry bear comes along looking for a fat-rich meal. Pound for pound, army cutworm moths are as calorie-rich as a stick of butter.

“I think of them as ‘bear butter’,” Peterson said. “By August, the moths are about 70 percent body fat,” among the fattiest known species. “That’s high time for the bears to dig them up by the thousands every day.”

Little is known about the alpine habitats that draw these moths. Peterson seeks to understand more about what happens in these high-alpine grizzly buffets.

Funded by the Glacier National Park Conservancy, a nonprofit fundraising partner for the Park, Peterson is completing the second summer of a two-year study of grizzlies’ use of moth clusters. Technicians hired for the project this year will explore high-elevation rocky slopes from the ground, surveying moth habitat and collecting geospatial data.

“We’re going to compare the sites where we find moths, and sign of bears feeding on them, to the places where we don’t, and try to understand what makes them different,” Peterson said.

Working with a private air company, Two Bear Air Rescue, Peterson will survey feeding grounds by helicopter, using a thermal imaging camera to determine where and how many grizzlies use individual patches of moth habitat.

With Thornton’s guidance, resulting scientific models will predict how these alpine habitats can support moths and grizzlies across the greater park ecosystem, potentially conserving an important food source for bears, as well as the apex predators themselves.

Bears have lived in Glacier park for millions of years, but their world is changing. Should a wild huckleberry crop fail, moths offer a better source of calories than a campground garbage can.

“Our goal is to develop a rigorous study that provides a better understanding of where and how grizzlies forage on this unique food resource,” Thornton said.

“That knowledge could be important to protect the future of grizzly bears as a species,” Peterson said.

Learn more about Peterson’s research into grizzlies and army cutworm moths on his team’s project website.