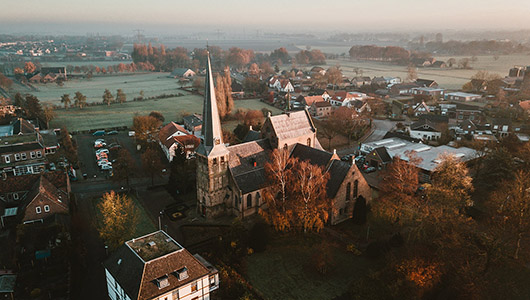 “In criminology, we often have this urban bias. We assume big cities are the worst and paint other places as idyllic,” said Kathryn DuBois, associate professor at WSU Vancouver. “We tend to think in a continuum from urban to suburban to rural, but for intimate partner violence, it’s actually the suburban areas that are the safest, and small towns that have the highest risk.”

The National Crime Victimization Survey collects information through a large sample of interviews about a range of personal crimes committed every year. Part of the intent of the survey is to uncover the “dark figure” of crime, DuBois said, those crimes that may not be reported to police.

While the survey defines many locations as simply urban or rural, DuBois analyzed the data by population density to delineate urban, suburban, small town and rural areas. Small towns were defined as urbanized portions of non-metropolitan counties with populations up to 50,000. They are distinct from suburban areas that exist just outside of big cities.

“Many surveys assume that everyone in those non-metropolitan counties are the same, but there’s a lot more heterogeneity across them,” Dubois said.

DuBois originally undertook the study to try and reconcile the inconsistency between national surveys, which typically find rural areas have less or similar rates of intimate partner violence to urban areas—and ethnographic research, in-depth qualitative studies that have indicated that rural isolation can exacerbate gender-based violence.

While the study data, published in the Journal of Interpersonal Violence, cannot reveal the reasons behind the violence, the finding about the high rate of intimate partner violence in small towns indicates that there may be a different set of factors at play, DuBois said.

“Small towns have populations large enough to have the difficult problems of a big city, while at the same time these are some of the hardest hit areas economically, so they don’t have specialized services and policing needed to deal with family violence,” DuBois said.