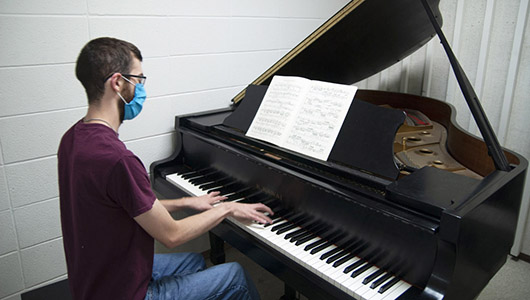 A combination of innovative technology and careful use of practice and performance spaces will enable Washington State University musicians to play together virtually this fall.

The University’s music groups, including jazz bands, choir, orchestra and of course, the Cougar Marching Band, all plan on recording and sharing virtual performances with the Cougar community in place of live concerts and halftime shows.

“We are going to be a marching band in name only but that doesn’t mean we are going to stop making music,” said Troy Bennefield, associate director of bands and director of athletic bands at WSU. “This is a chance for us to really remind people we are more than just a football band. We are the University’s spirit group, and we are going to keep making music that makes people feel like they are a part of the Cougar community.”

The COVID-19 pandemic has forced music directors such as Bennefield and Dean Luethi, director of the School of Music and choral activities at WSU, to shift their focus from preparing students for the big live show to helping them work on their musicianship and other fundamental skills individually and in small virtual groups.

“If we are going to be doing three virtual performances rather than nine live shows that gives us the opportunity to focus on all of these other skills such vocal technique and music theory that are often not a priority,” Luethi said. “At the end of the day, I think we are all going to be much better musicians as a result of everything that is going on right now with COVID-19.”

Practice for the marching band, choir and other performing groups such as jazz bands and orchestra will involve the use of one-on-one and small group instruction via Zoom as well as other apps that enable musicians to play together online, get real-time feedback on their performance and work on important skills such as sight-reading.

For virtual performances, students will have a set time to practice a particular piece of music before recording their part individually and submitting it to an instructor.

“And then we are going to go through the process of trying to manage how to put together all of these individual recordings into a larger piece of music,” Bennefield said. “We are going to be patient because there will obviously be a pretty steep learning curve. Nevertheless, we hope to have a few good things out by December that we can show.”

One of the key challenges the School of Music had to overcame to make any sort of virtual performances possible this fall was finding places for their student to practice and perform while still adhering to COVID-19 physical distancing restrictions.

“Many students have self-confidence issues when it comes to practicing at home when their parents, brothers, sisters and whoever else is there,” said Luethi said. “For others, there are often restrictions at their apartment complexes against practicing the tuba for two or three hours in the afternoon. So, we knew it was essential to find a solution to this problem as the semester gets underway.”

Luethi worked with the University’s risk management advisory group to get a proposal approved that enables music majors and members of the school’s various ensembles to use performance spaces, practice rooms and recording studios in the Kimbrough Music Building.

The proposal allows for one unmasked musician or 10 masked musicians to perform on the large stages in the Bryan Hall Theater and Kimbrough Concert Hall. It also will enable individual students to use the 48 different rehearsal spaces in Kimbrough Hall on an appointment basis.

“We just finished getting locks installed on all the doors and had about 100 keys made,” Luethi said. “We want to make sure we know where all of our students are at all times during COVID-19.”

Both Luethi and Bennefield said their greatest hope this fall is to be able to maintain the sense of community that is a major draw for many student musicians at WSU.