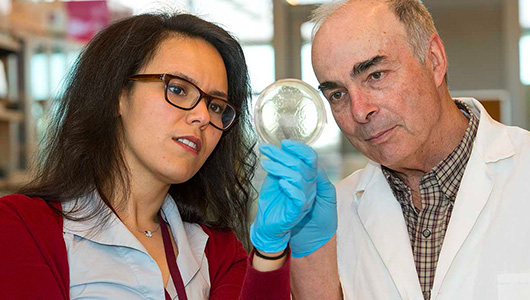 It was 1991 and medicinal chemist Joe Harding was in his lab researching potential new options for relieving high blood pressure. Anomalies kept showing up in his lab tests, and if they meant what he thought they might, he and his research partner, WSU psychology professor John (Jay) Wright, were on the brink of a different breakthrough.

“I kept getting phone calls from Joe, and on each one he was more excited,” recalls Wright, who at the time was away on sabbatical at the University of Illinois. “He said I had to come back to Pullman because we were on to something big.”

What Harding first spotted nearly 30 years ago transformed the direction of their research.

Harding was trying to isolate, purify and clone the protein receptor for the hormone angiotensin II when he noticed the unusual results. The molecule that he discovered was binding in an area of the brain associated with memory, and in the years that followed, the two WSU scientists discovered that it could activate a powerful growth system that can stimulate the production of new nerve cells and enable damaged nerve cells to replace connections lost during the disease process. The work that came out of that WSU lab has since shown that activating this system reversed cognitive deficits in multiple models of dementia.

“We’re hoping that this will be a game changer,” said Harding, a professor in the Department of Integrative Physiology and Neuroscience in WSU’s College of Veterinary Medicine. “It’s a life’s work. And it is not only me and Jay—it took teams of people, graduate and undergraduate students as well as post-docs and veterinary medical students to make this happen. We will celebrate when the first person successfully treated for dementia or Alzheimer’s doesn’t have to go into a nursing home.”

Seattle-based Athira Pharma, a biotech startup founded by Harding and Wright which has built on the WSU-licensed research to develop potential drug therapies for neurodegenerative diseases, raised more than $200 million in an initial public stock offering. The funding is intended to help pay for the continuing research and development for therapies for Alzheimer’s, dementia and other neurodegenerative diseases such as Parkinson’s and ALS or Lou Gehrig’s Disease. Athira has not only licensed WSU’s intellectual property behind this work but also employs several WSU alumni who earned their degrees studying under Harding and Wright.

If the company is successful in bringing a drug therapy to market, it would mark a turning point in WSU’s research enterprise and provide potential financial returns for the university and the state of Washington, both of which supported the early years of the science. This is the first WSU faculty-owned start-up company that has been publicly traded.

“Our research program wouldn’t have been possible without the support from the university,” said Wright, now a professor emeritus of psychology. “We hope if this is commercially successful, it will justify the resources the university and the state put into our research.”

Athira’s compound is based off an analog of an angiotensin IV, a degradation product of a protein hormone normally associated with managing blood pressure and fluid levels in the body.

Early on, Harding and Wright focused on angiotensin II, a form of the protein with eight amino acids, to find a better treatment for hypertension. They were starting to look at different forms of the protein when Harding found that angiotensin IV, which has six amino acids, bound to pyramid-like structures within the brain’s hippocampus associated with memory and cognition. Wright then set up animal models and found that cognitively impaired rats treated with the protein performed better in challenging water maze tasks.

Yet, the researchers still had three problems to solve before the discovery could be useful. First, angiotensin IV metabolized quickly in the body, meaning it could disappear before it was effective. Next, even if they could make it last, they had to find a way to get the bulky six-amino-acid protein past the blood-brain barrier, which protects the brain from potentially harmful things circulating in the blood. Third, while they had evidence that angiotensin IV improved cognition, they didn’t know exactly why.

Harding set his graduate students to the task of creating hundreds of analogs, compounds that acted in similar fashion to angiotensin IV. Ultimately, some of those analogs worked better than the original protein and were able to persist longer in the body. Harding was also able to refine some of them so they could pass through blood-brain barrier.

In the early 2000s, other scientists defined the hepatocyte growth factor in the brain, and the WSU team quickly realized they had found the target of their protein.

Harding then gave a promising graduate student the toughest PhD project he had: to prove that the angiotensin IV analog interacted with the hepatocyte growth factor. She accomplished this hard task along with her PhD in three and a half years. That graduate student, Leen Kawas, went on to become the CEO of Athira. Two other lab alumni also hold key positions in the company: Vice President for Research and Development Kevin Church and Senior Scientist Jewel LeValley.

While Athira’s treatment for Alzheimer’s disease is in the last clinical trial phases, the company is starting trials for a treatment for Parkinson’s disease and exploring other candidates for neuropathy and neuropsychiatric indications.

Also, in the process of creating analogs, the WSU research team discovered antagonists, compounds that inhibit the growth factor. These may have implications for treating cancer, Harding said.

“This cognitive work is only a small portion of what is possible,” said Harding. “Coming down the line over the next decade, I expect Athira will produce many useful pharmaceuticals.”