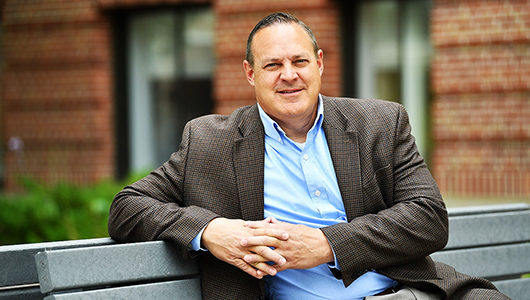 Bill Gardner grew up on Pullman’s College Hill and thought for sure he was on track to be a teacher when he graduated from WSU. His father was a soil physicist at the University from 1950 to 1983. “I was 11 before I realized there were professions other than being a professor,” he says. “If I stood out at the end of my driveway, every house I saw had a professor living there.”

Gardner (’88, ’01 MA English), chief of Washington State University Police (and a published author), got into police work almost on a whim. He drove to the campus station with a friend who wanted to apply and decided to apply, too. He worked as a full-time officer for WSU police from 1990 to 1993, then took a position with the Pullman Police Department as a school resource officer.

By 2004, it was time for a change. Gardner left the force for business enterprises—most notably working with the undersecretary for Mexico’s Secretariat of Agriculture and Rural Development through a friend’s risk management firm. Gardner aimed to find ways to help Mexican agricultural products enter the global market, flying—often weekly—to Mexico City.

The experience helped him cultivate leadership skills. One rule-of-thumb he developed: for a partnership to be successful, both partners must need each other. “When your partner didn’t need you, you were in a risky place. And when you didn’t need your partner, you had a ball and chain,” he explains.

His second rule is that one and one should make three. “Anybody can take one and one to make two, but you have to have the right people to make sure the things you are putting together are multiplying. From a day-to-day perspective, my leadership is dependent on good work from my staff,” says Gardner, who’s served as WSU’s police chief since 2008. Today, he oversees about 100 employees, plus some 50 student interns from WSU’s criminal justice program.

As executive director of public safety at WSU, Gardner sits on the system-wide Incident Command System team, formed to navigate the COVID-19 outbreak. “The COVID-19 experience has definitely been a challenge and a growth experience for me,” he says.

Though his teaching goals have long been put to rest, Gardner has put his English degrees to use, writing several young adult books. “My sister has four sons, and she complained to me one day that there was nothing good for her kids to read,” he says. His first novel, Race Against Time, was published by Covenant Communications in 2001 under the pen name Willard Boyd Gardner. He wrote two more, published in 2003 and 2007, focusing on how law enforcement officers deal with grief, trauma, and relationships—with a little time travel mixed in.

Gardner attended book signings and appeared on radio shows, sometimes alongside James Dashner, author of the popular “Maze Runner” series. But Gardner says he wasn’t nearly as personable as Dashner, nor did he enjoy the publicity. He eventually found something more his style: ghostwriting. “I didn’t know how I’d feel about writing something and having someone else’s name on it,” he says, “but I loved it.”

Despite a career full of twists and turns, Gardner says, “I’m not sure I have another big change in me. I love the people here, and my grandkids live in Pullman, so there’s no reason for me to leave. I would love to ghostwrite another book, though.”